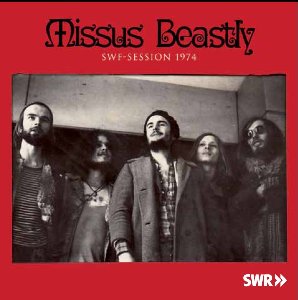 Now this is the kind of announcement that gets my blood pumping! The always-great Long Hair label plans on issuing a new SWF album, this time by one of the CDRWL's all-time favorite bands: Missus Beastly! For over a decade, Long Hair has successfully mined the SWF archives and they've proven over and over what a treasure trove it is.  Let's just hope that one day they issue the brilliant Tortilla Flat SWF session, one of the most stunning recordings I've ever heard.

From my perspective, there is some cause for concern here. Why? Because Garden of Delights a few years back also released a 1974 live concert from Missus Beastly titled "Bremen 1974", with the added drool-factor of Eddy Marron (Dzyan, Vita Nova) on guitar. Unfortunately it ended up being way too improvisational for my tastes, and much of it was a snooze fest. I was extremely disappointed, especially given the premise (or promise).

My big hope here is that the SWF Sessions are generally more composed than a typical live setting, and it appears this is the same line-up as the sublime 1974 Nova label album. On the hype sheet (see below), it does refer to the "band's great talent for improvisations", so this could go either way. I'm going to be optimistic and hope this is a killer!

Label says: "Recorded early 1974 at the SWF-Studio in Baden-Baden, Germany by the same line-up, which recorded at the same time the 2nd Missus Beastly album. Improved versions of older titles and some new titles prove the bands great talent for improvisations. Brilliant sound of brilliant tunes played by refined musicians. This kind of instrumental krautjazzrock is timeless. The musical orientation of the new Missus Beastly rather followed afro-american than European music traditions, but influenced by that certain Krautrock feel. Great music by a great band. Digitally remastered from original master tape. Comes with informative booklet and rare photos (vinyl-version with insert). Also on vinyl. Don’t miss it."

Look for a November release.
Posted by Purple Peak Records at 7:31 AM

Just got it in today ... it is indeed from the best period of missus beastly and it's fantastic.

Ah - that's great to hear. Thanks Tristan for letting me know. I'll be picking up soon.