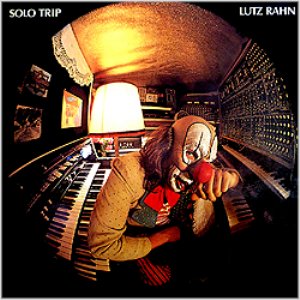 Saw this late last week, and meant to give it some air time. Made in Germany continues to release some interesting obscure material from Germany. I haven't personally heard this album, but I've been told it's a pretty decent electronic styled release. Love the cover!

Also look for the 1980 album by Novalis called "Augenblicke" as well as the 1984 album "Bumarang", both of which are well past their shelf date as far as I'm concerned, though I know a few progressive rock fans that enjoy these - so good news if you're a fan!

The label says this about "Solo Trip":

"By the end of the seventies the band Novalis from Hamburg had to cope with a lot of stress including their charismatic Austrian singer Fred Mühlböck. Creatively as well as commercially the band had reached the height of their career. In 1978, their masterpiece Vielleicht bist du ein Clown? had been released, one year later saw the release of their first and only superb concept album Flossenengel.

At the same time Novalis' keyboardist Lutz Rahn took a Solo Trip (thus title of the longplayer). The album contains elements of classic ambient piano music, vibrant organ loops and idyllic electronic soundscapes. Many a follower of the band was wondering and even feared if this solo trip of the introvert and innovative keyboard virtuoso could be seen as an act to free himself from the shackles of his native band. Even today Rahn is objecting vigorously to this thought by assessing 'This 'coup' solely resulted from my musical curiosity. When we founded Novalis in 1971, my main instrument was the Hammond organ. I wanted to use most of the latest electronic musical instruments that been had developed such as sequencers. These numerous new possibilities had an impact on my song writing and arrangements.' And he adds: 'In the course of events I have developed a certain taste for musical experiments. Aside from working with Novalis I was tempted to pursuit other paths. During these trips I had collected quite a bit of material - but not with the purpose to create a solo album from that. Most of the tracks emerged even earlier, even years before, and not shortly before the release of Solo Trip.'

And on a Solo Trip he went indeed. Except drummer and personal friend Helge Tillman it was Lutz who played all instruments. The fact that there are no vocals on the album does not at all decrease the dynamics and extraordinary versatility of the eight tracks. 'Besides, I am a lousy singer. That's why I left it at that,' Rahn explains with the stoical humour being typical for the North of Germany.

According to Lutz there is no concept behind Solo Trip. 'It is simply a selection of instrumental ideas and thoughts, ideas exciting to me. What's more, I wanted to experiment with my electronic instruments and devices, which used to be state-of-the-art, without having to compromise with some other band members,' he confirms. Solo Trip won high praise, especially from pro keyboardists who compared the production to early works of French sound magician Jean-Michel Jarre or those of the Japanese band Far East Family headed by the most talented keyboard sorcerer Kitaro.

Despite rave reviews Solo Trip remained Lutz Rahn's only solo album. 'I never really intended to be a solo artist,' he explains. 'I was far too dedicated to the band and happy with it. My picture on the album wearing a clown mask which I was able to hide behind certainly summed up a principle of mine.' "
Posted by Purple Peak Records at 6:50 AM

Thanks Tom for the good news! For some reason I always liked this album and will welcome this edition for sure.

The albums I want to see issued on cd by Novalis are Neumond and Sterntaucher both of which deserve a re-issue remaster more than Bumerang, imho