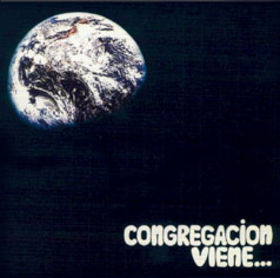 Label says: "Congregacion was the most legendary of the many excellent bands of the early 1970s Chilean music scene-one could easily say that for many people, this album has had the impact of a religious experience. There is good reason for that: Congregacion's music has a highly evocative sense of space, using natural sounds, native Andean instruments, and acoustic textures to foreground ecologist and mystic Antonio Smith's soaring melodies and deeply felt, philosophical lyrics. The results make this one of those perfect albums that works just as well on a Sunday morning as it does late at night. If things had worked out differently for Smith and Congregacion, this album might be as well-known (and well-loved) as comparable albums-comparable masterpieces-Milton Nascimento's "Clube de Esquina," and Joyce and Nelson Angelo's eponymous album. Unfortunately, Smiths lyrics earned him the enmity of the Chilean military dictatorship; he was forced to flee the country and "Viene." (IRT, 1972) proved to be the bands only release. Still, were lucky to have this album, with its perfect sequence of gentle, undulating, heavily-textured arrangements supporting Smiths plaintive, intimate and searching vocals. The result is an atmosphere of peace and enlightenment, with deep and introspective moments of great quality; incredibly beautiful. Congregacion band member Carlos Vittini gave some insight into Smith's charismatic mysticism: "I still get excited about how a musician has a great place in capturing the sensibility of the people. I knew the immense creative capacity of Antonio. From the sound of a bird, he speaks, capturing in passing the chirp of a chincol (sparrow) singing in a square, where these memories were made-from this he created a song." A highly recommended album, surely one of the pinnacles of dreamy psychedelia, despite its relative obscurity and undeniable rarity. Our deluxe, mini-LP gatefold jacket edition comes with a bi-lingual 32-page booklet, which explores the story of Congregacion in the context of the rich Chilean rock music scene."
Posted by Purple Peak Records at 7:53 AM