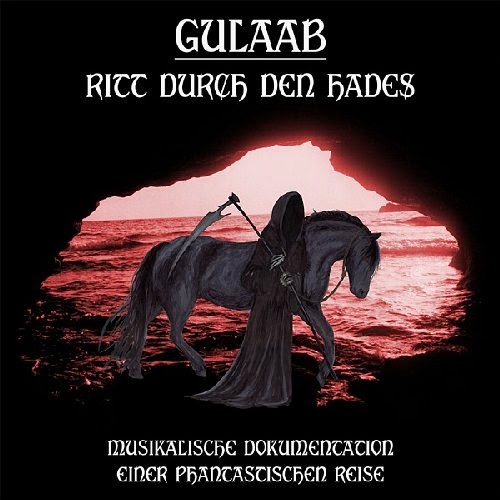 This one caught my eye yesterday morning right before one of those classic 18 hour work days complete with social events. Trying to catch up here, and wanted to get this news out as soon as possible. I'm not familiar with this title, and apparently it was released only on cassette. The description below, though, looks to be highly appealing to me. I also read one review on RYM that likened the album to Algarnas Tradgard. Since it appears to be a solo album, I'll keep my expectations in check - but it does look intriguing all the same.

The label is Merlin's Nose, which I haven't run into prior. "Ultra-rare lost psychedelic Kraut-Folk from 1979. First time on CD and LP! Taken from the original mastertapes! Gulaab means “rose” in Nepalese language. Gulaab is a German virtuoso on the acoustic guitar who has served three years as an after dinner musician in a luxury restaurant in Nepal to play for an amazing number of well known personalities of the 20th century during the early 70s. A strongly influential experience that shaped his musical expression big time but also let him become an open minded spirit. “Ritt durch den Hades” is the result of his experimentation with sounds, atmospheres and a multitude of styles in traditional music from Latin to Eastern Asian elements. It was first released in 1979, vanishing into obscurity soon after , waiting to be rediscovered by a more open minded generation of music lovers now. Traditionalists be forewarned : This mystic grail of 70s “kraut folk” stands far out from the average folk and singer / songwriter stuff combining guitar harmonies of the highest order with a cosmic drone that backs up the hypnotizing picking and trippy swirls of sounds. This album is in fact more like a musical journey than just a piece of music taking you from secret sacrificial altars in the Andes to the ceremonial places of the ancient Himalayan population with a short stopover for a little “joint venture” in the musical space centers of highly flown out German originators like ASH RA TEMPEL / Manuel Göttsching, POPUL VUH / Florian Fricke, WITTHÜSSER & WESTRUPP, BRÖSELMASCHINE, DOM or DEUTER. Now take a ride through Hades with GULAAB!"
Posted by Purple Peak Records at 9:24 AM