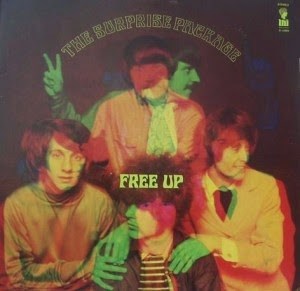 I was reminded of this title as I was researching The Aggregation two nights ago. The Surprise Package were also on Lee Hazlewood's label. I bought the album in the late 80s but sold it about 10 years after that. And completely forgot about it. And like The Aggregation, pirate editions abound, so time to enter into the CDRWL. Since I don't possess any copy of this album, off to YouTube I went for a refresher. And it's what I recalled. A varied "kitchen sink" type of psych album on one side, and a side long jam on the other. The jam itself features some great psych guitar, Iron Butterfly styled organ, and the song itself reminds me of Rare Earth. But of course it has an insufferably long drum solo to take a nap to. Not a bad album (I probably should have kept it), but one that doesn't need a reissue unless there's some superb archival material sitting in the vaults.

Priority: none
Posted by Purple Peak Records at 9:28 AM

Labels: Priority none, The Surprise Package