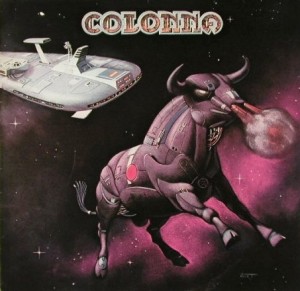 Another album that probably sits outside the margins of our list. But what a cover, eh? I received this CD-R from Midwest Mike years ago. Worth featuring I think.

Colonna is one Maurizio Colonna, who is today recognized as one of Italy's finest Spanish guitar players. This is his debut album, which naturally enough prominently features Colonna on the acoustic Spanish guitar. His exemplary playing is augmented by vocals, Moog synths, and rock/disco beats. He has many more albums which I've not heard to date. This one sports a pretty cool cover (a flying bull and a spaceship), and I could see this falling prey to the Italian progressive rock collector, though it has no stylistic similarities whatsoever. Well done for what it is. I'll include it here for those Italian prog treasure hunters, so they know what they're getting into. Also worth noting the exceptional supporting cast: Roberto Colombo, Tullio De Piscopo, Mark Harris (Napoli Centrale), Bernardo Lanzetti (PFM, Acqua Fragile) and bassist Ares Tavolazzi (Area).

Priority: none
Posted by Purple Peak Records at 7:18 AM