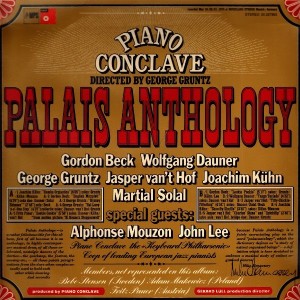 Here's one Midwest Mike sent me years ago, and it recently popped up on the CD-R revisit project. Definitely worthy of its own post!

Hard hitting fusion from an all-star cast of Europe's finest ivory ticklers of the mid 70s. A mix of funky fusion, Canterbury rock, and straight-up piano jazz. A nice surprise, and not an album one would likely buy if they saw the cover - except noting the marquee names, which is more than impressive: Gordon Beck, Wolfgang Dauner, George Gruntz, Jasper Van't Hof, Joachim Kuhn, Martial Solal, John Lee, Alphonse Mouzon. Yep, pretty ridiculous lineup right there.

Priority: 3
Posted by Purple Peak Records at 8:40 AM