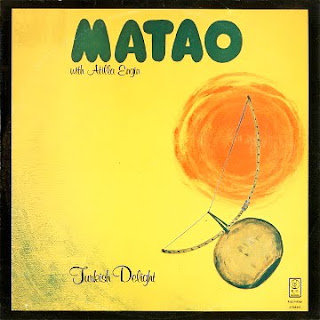 Another insane obscurity from The Alaskan Connection. As noted by the AC, Atilla Engin is a Turkish percussionist who landed in Denmark and formed a fusion group. My first thought was this is Engin's response to Oriental Wind (who were based in Sweden)! But Matao are a more fiery bunch with a strong rock component (especially in the guitar work), verse the more decidedly jazz direction of Okay Temiz's group. As if a Turkish drummer suddenly took over Secret Oyster. Not surprisingly, there's a strong slant towards Middle Eastern melodies and scales. The AC's observation about the Rock Andaluz scene in Spain is very astute as well. Another excellent discovery and well worth a CD.

The AC says: "Atilla Engin is a Turkish drummer/percussionist who emigrated to Denmark in the 1970s and formed the band Matao with local Danish musicians. It seems they only stayed together long enough to record this one LP, but what an LP it is! This actually has some similarities with the Louis Banks/Sangam record I covered recently, in that it's an intense sort of ethnic jazz-rock fusion with a strong percussive drive, but obviously in this case with Turkish influences rather than Indian. But what really sets Matao apart and pushes this album over the top is the heavy dose of complex instrumental progressive rock that they throw into the mix, often achieving a sound that bears striking resemblance to some of the classic "Rock Andaluz" groups from Spain. In fact, one of the tracks here is actually named "Rain In Spain", so that style may have been a real influence on them rather than just a strange coincidence. In any case, this is a truly choice blend here. The musicianship and production are superb, and on top of that it's a fairly lengthy LP (over 45 minutes), but remains entirely consistent all the way through, with nary a dull moment or duff track to be heard. A real gem in my opinion, that unfortunately seems almost completely unknown. After Matao broke up, Engin formed a new band (still in Denmark) called the Atilla Engin Group. Their first album, "Nazar" (1982), while not nearly at the level of this one, is also worth tracking down."

Another serious rarity. Not listed in RYM(our friend Isabel has now added it!). As with many of these titles from the AC, I personally added this to our Gnosis database.

Priority: 3 (borderline 2 - probably a couple of more listens and I'll be there!)
Posted by Purple Peak Records at 7:39 AM

Thanks. An excellent album.