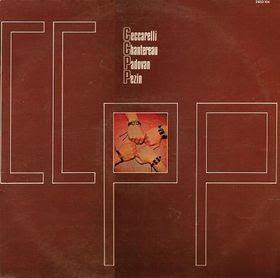 This year we open with a news item, which had slowed considerably in the last couple of months.

Before going to the announcement, let's recap some of what we can expect in 2012: 1) The first reissues from Modulus in March (Het Pandorra Ensemble, Randy Roos); 2) the remainder of the Sunbirds and Missus Beastly CDs from Garden of Delights; 3) and finally the much anticipated Laurence Vanay albums from Lion Productions. There are others of course in the hopper. 2011 was a great year for obscure progressive rock CDs, especially from Japan, so the bar has been set high for 2012.

Today's announcement comes from the hipster French label Vadim. Their label output crosses into CDRWL territory on occasion, generally in the areas of early/mid 70s jazz rock. Their best reissue to date, for me anyway, is Laurent Petitgerard's "Pop Instrumental de France".

For my tastes, neither CCPP nor the Nilovic are essential, but I know many who revere these records highly. We never featured the Nilovic and we have the CCPP only in the main list, where I had this thumbnail sketch: "Ceccarelli / Chantereau / Padovan / Pezin - C.C.P.P. (France) 1975 Flamophone. Typical funky fusion, though the guitar solos have more bite to them than usual, thus adding more to the score." Believe it or not, that's actually more informative than the label's description, which says: "Vadim brings you a shining example of 70s European jazz funk with this legendary and unique album from French supergroup C.C.P.P." Just a quick note to state we still have plenty of rarities to talk about here. A large amount of albums came in from The Alaskan Connection that I still need to absorb. As well we have a couple left from the Midwest Mike stack, including one I think many of you will want to seek out instantly. And finally, StrawbsFan has sent in a nice batch of progressive folk and electronic rarities. Time is my eternal enemy, and the new year promises to be very busy from a career perspective - so we'll see how it goes. The more I can get done in the next couple of weeks, the better....
Posted by Purple Peak Records at 6:52 AM