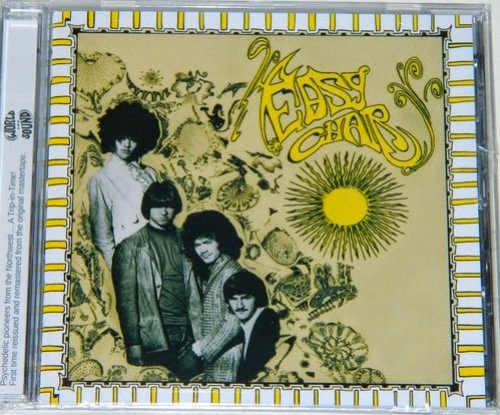 OK, time to take a break from the rarities until later in the week and catch up on some news and CD-R revisits. CDRWL reader Grant has informed us of a couple of relevant reissues that have come about recently. First off is this extreme rarity from Seattle circa 1968 reissued by the high quality World in Sound label of Germany. Easy Chair was recorded on one side and featured only 3 songs totaling 20 minutes. There's no bonus tracks here, so consider this a mini-CD as it were. I've not heard of the band or album prior to this announcement. (4/21/15 update: I did listen to it on YouTube last night, and I have to say it is really good. Somber stretched-out blues psych. It's sadly too short, so a CD may be superfluous, but I'll buy one if the right price comes along).

Label says: "Long expected and now re-issued (with remastered sound) for the first time! Easy Chair's 1968 one-sided album, with a running time of 20 minutes, is one of the most sought-after US North-West psych-underground records of all time. Original copies have been sold for over 1.000 US$. Justly remembered as psychedelic rock pioneers, they crammed an amazing career into only one year of activity. Easy Chair performed with the Yardbirds, Cream and the Mothers of Invention. Their epic West Coast blues features the unique chemistry of psychedelic guitar leads, fluid lines and hypnotic chording. By the end of 1968 they caught the attention of Zappa's crew and signed a record contract with Bizarre Records. Unfortunately Easy Chair broke up too soon, though multi-instrumentalist Jeff Simmons, together with drummer Al Malosky, recorded the 'Naked Angels' soundtrack (re-released by WIS in 2008). After releasing his solo album 'Lucille Has Messed my Mind up' in 1969, Jeff joined The Mothers."
Posted by Purple Peak Records at 8:01 AM