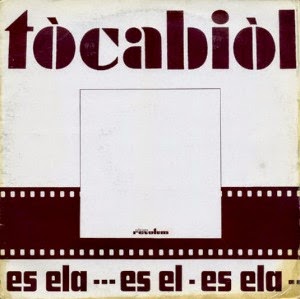 Here's a title I ran across the other day, and decided to promote from the main list to give it more exposure.

The first half of "Es El,  Es Ela..." is strictly regional folk music, while the other is a long spaced out acid folk rock journey, with narrative vocals. This half reminds me some of Sergius Golowin without the intense percussive build-ups. Perhaps they have another session similar that would make a great CD? The album is sung in Occitan, a language found in southern France and northern Spain.

Tocabiol has a second album that came out in 1979 (Beleu), but I recall that one is of little interest to progressive rock fans. I have it in one of my later CD-R binders, so I'll relisten to see if my opinion changes at that time.

Priority: none
Posted by Purple Peak Records at 8:12 AM