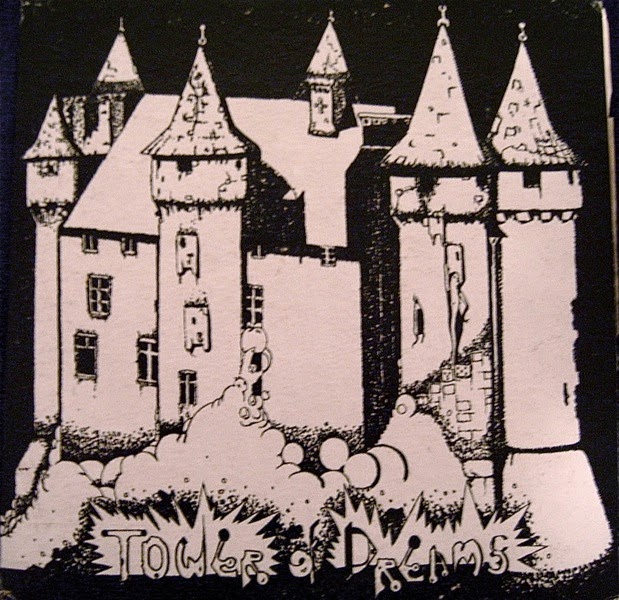 From the mysterious lands of Japan to the medieval castles of Europe, so goes the AC. Well at least if cool album covers are any indication. But alas, the band is from New Jersey. As the stylus drops, one hears some dark electronics. Oh, this one is going to be good! Let's check the AC's dig notes shall we? "If you were to stumble upon this odd little artifact of the private press heyday, you'd probably be pretty excited, thinking you may have just discovered some lost relic of the US progressive rock underground. Evocative band name and song titles, all instrumental, primitive but cool black and white fantasy artwork, weird comic insert with conceptual track descriptions, etc. A sure fire score, right? Well, "not so fast, my friend!" as a certain sports broadcaster is wont to say. Unusually released on 10" vinyl, this is somewhere between a very short LP and a long EP (around 20 minutes), being the work of New Jersey bassist Gene O'Brien and his backing band. Musically, it's kind of hard to pin down, as it's not really prog, psych or fusion per se. Maybe "atmospheric instrumental rock" will do the trick? It's all very low-key, with just a few flashes of guitar soloing to liven things up, and rhythmically quite straight forward. It seems to be themed on sleep and dreaming, so I guess the overall soporific atmosphere is appropriate. About the only direct comparison I could make would maybe be the most sedate parts of the Bob Bath Band album (similarly instrumental, guitar-oriented, and methodically paced), but even that's a stretch. A puzzling one really, although I can't help but kind of like it. For US underground completists only."

Ah crap. The review is very fair, and it does remind me of those American bands that surfaced in the early 80s when the majors had long pulled out of the progressive market, and anyone with a good connection and a few extra dollars, would get an album pressed. They all have this sort of "dull" sound. Not the music necessarily, but there's just no edge to the instrumentation or production. As The AC notes, I kind of like it too. But honestly, past the cool cover and intriguing comic book, there's not a whole that that pushes this one forward into the tantalizing category. Interestingly enough, a copy sold for all of $2.99 last week on ebay. Not all long lost artifacts have value.

Priority: none
Posted by Purple Peak Records at 9:07 AM

Labels: Priority none, Tower of Dreams