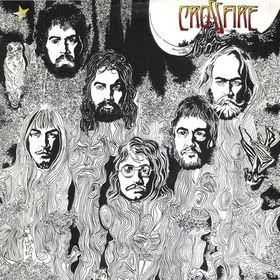 With the soprano sax, and occasional hard guitar lead, Crossfire brings to mind the German group Aera, or maybe a slightly less rocking Secret Oyster. Fellow Australians Mackenzie Theory could almost be sited as a reference, though trading the violin in for soprano sax. All instrumental save the last track (and the vocals proved to not be a good idea). Crossfire went on to release at least 3 further albums starting in 1978, presumably even more fusion oriented than their debut.

Priority: 3
Posted by Purple Peak Records at 5:50 AM

Hi Tom, this is indeed a good LP. However, I've heard a couple of their later ones and they're just really slick fuzak and cocktail jazz. Definitely of no real interest. One other Australian fusion group you might want to check out is Pyramid. Their first LP from 1980 is not bad, although still a little on the slick side. Heavily Weather Report influenced, with one really long (almost side-long) piece that's pretty good. Probably not worthy of the main CDRWL, but maybe worth putting on the original list.

By the way, you might remember that I mentioned an obscure Arizona band called Seacloud. Well, it turns out one of the former members put some of their material up on Youtube a while back. Here's the link if you want to check it out: http://www.youtube.com/user/Seacloudtheband

Thanks for confirming my suspicions on the later Crossfire albums. Based on what I was reading, it definitely seemed out of my interest area.

Funny your comments about Pyramid and the featured albums vs main list. You're absolutely right about that. I haven't heard Pyramid as you guessed, so I'll need to check that one out eventually.

Also, thanks for the link on Seacloud. I just checked it out. Man, you're right, totally that Midwest progressive sound. There must have been a small Arizona contingent, especially when considering Booth Davis and Lowe also have that sound. The Seacloud reminds me of Styx in the vocal sections, but then they'll throw in a complex break. Like Surprise (from St. Louis). Great stuff - I love music like that. It would be great if they had a CDs worth of archive material in that same vein.