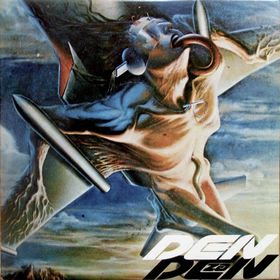 Funny, as the data I had on this was it was released in 1977 and from Montenegro. I have no idea where I got that notion, as I cannot find any reference for either. In studying my LP (that I bought in the mid 90s) there is no mention of the date, and the album was released by the Slovenian branch of the various state labels. But plenty of internet references clearly point Den Za Den as being from Macedonia, and many of them also call out a similar sound to that country's most known group: Leb I Sol.

Personally I don't hear it so much, as Den Za Den are way more fiery, with a stronger melodic sense. Still there's no denying the late 70's fusion sound. What separates Den Za Den from the pack is the exceptional guitarist, the distinct melodies, and perhaps best of all, the insane drumming along the lines of Arti + Mestieri. I'm a sucker for active drummers, so I naturally rate this one higher than other fusion albums of the era. Maybe Slovakia's Fermata is the closest comparison amongst the usual suspects like Mahavishnu Orchestra and Weather Report. Like most East Euro LP's, the sound quality is extremely muddy. Experience has shown the master tapes are well preserved, so a CD reissue is likely to raise the rating another point. This one desperately could use a reissue.

Priority: 2
Posted by Purple Peak Records at 5:27 AM