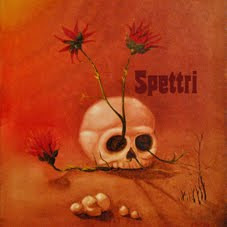 Caught this one while surfing. Don't know anything about it, but it could be interesting!

"SPETTRI is an Italian band that sees the light of day in Florence in 1964. In those years, the “italian beat” is highly on. The original members are: Ugo and Raffaele Ponticiello (brothers, voice and guitar), Giuliano Giunti (bass guitar) and Ubaldo Palanti (drums) but the latter is soon replaced by Mauro Sarti.
They soon release some 45 r.p.m. records during the early Beat. The sound is amazing and their performances are great. The group is the very first one in Florence who decides to use “100 watt GRS” guitar amplifiers, a real revolutionary choice, since that powerful sound was still unknown until then.
In 1968, Mauro Sarti leaves the band. Giorgio Di Ruvo (a former member of The Players, a rhythm and blues group) and Alessio Rogai (keyboards) join the group. In 1970 he leaves in favour of Stefano Melani. Giuseppe Nenci, bass guitar, is part of the group for a short time in 1970. In 1971, the Ponticiello youngest brother, Vincenzo, takes the place of Giuseppe Nenci.
In 1970 their music is changing. The whole music scene is changing too: the Beat is off. On stage, they perform rock band covers (Spirit, Black Sabbath, Deep Purple...). Their rehearsals are very creative original experimental works. They draw inspiration from bands they listened to in that period. Bands like the ones mentioned before and like King Crimson and Colosseum, for example, strongly influenced every single member of the group. That new kind of music is soon labelled “Avant-garde” : the same sound we call “Prog” today.
Their concept album is really special: all their lyrics are written by Ugo Ponticiello. The lyrics deal with a man who tries to find his way by a spiritualist séance. He gives himself up to the metaphysics and the afterlife to pursue a reason to live. All alone, he leaves a real terrible nightmare where he finally finds his way but it’s brutalized by the evils of modern society.
The musical part is a rock suite: electric and bass guitars, drums and an hammond organ. These instruments coexist in a new perfect experimental rock sound. The group includes this composition in their live performances. During their countless live concerts in the most important Italian pop festivals in Tuscany and Latium, they play side by side with the most influential bands of the genre.
This suite is composed in 1970/71, recorded in 1972 and it is an unpublished work because it was never released up to today. Since 1975 on, some new music tendencies and the growing public indifference to refined music have led the group to different music choices and their original project has been held over until...now, 2011."

I read about this in the BTF newsletter and was hoping the cognoscenti would now more... Looks like they don't then :-)

Haha! Well the real cognoscenti *might* know, but your humble author certainly doesn't ;-)

Well, if they do, they're keeping it to themselves...

A review has appeared on the German Babyblaue Seiten. I don't know how good your German is, but I can do you a translation if you like.

Thanks Bas for the link! My German is non-existent (except for a few curse words I learned from my Grandmother who came over on the boat - and died in her 70's back in 1978). But Google's grasp is better than mine. I can at least make out what Babyblaue's review is (and the 8 out of 15 may say more than the below) :)

"The Spettri (ghosts) to the brothers Ponticelli came from Florence. Already in 1964 the band created by Ugo and Raffaele Ponticelli. At times, the later Campo di Marte, drummer Mauro Sarti belonged to the group. In the early 1970s, a stable occupation was with the third-Ponticelli brother Vincenzo on bass, Stefano Melani at the keys and Giorgio Di RuvA on drums. Except for a few beats and pop single, the band has released any recordings. The mid-'70s, the group fell apart well.

At the beginning of the decade it had turned to the Hard Rock, including covert Pieces of Deep Purple and Black Sabbath, before you know a more complex Orgelprog devoted. The band was very active and live in Italy, the core of their shows was a four-part suite that held the group in 1972, on tape. It is here apparently a man who turns to after a seance metaphysical worlds and seeks salvation in the afterlife, only to find himself after a terrible nightmare in the troubled reality again. However, the same was published in 2011. The sound of "Spettri" is what one would expect from such a fund drawer. Not bad but not good either, but it is very noisy and now and then breaks off a channel.

Black Widow, the label which has "Spettri" published saves in the booklet with words to the whole thing as a progressive, avant-garde (from view at that time) and to describe experimentally. What is there to listen to but is actually a very typical time organ (proto) prog, as he was then not at all rare. Electric guitar and Hammond on Blue base rock, sometimes edgy, sometimes worn as meaning more or less driven by the powerful rhythm section. There are some powerful and suffering singing in Italian. (To name just one example) Deep Purple are not far away, as well as several others angeproggte Hard Rock bands of the early 70s with a dominant organ-guitar duo. Something sacred, which are complex and proggiger Spettri while going to, but particularly original or novel is (was) the music (then) no. Needed to hide the Italians but also against anyone.

"Spettri" is a pretty decent archive document, but which is unfortunately almost 40 years too late. Had the album then appeared, produced properly and with a few instrumental additions (perhaps a flute), the band would have ended up a classic (perhaps not unlike the one album of the Florentine colleagues Campo di Marte). So the whole thing probably only an object for absolute Italokomplettisten (or in honor of grizzled former fans of the band)!"

A surprisingly coherent effort from Google, I must say! Here's a quick clean-up of the text. Still not perfect, but hopefully a bit more pleasing on the eye, so to speak :-)

"Spettri (ghosts), formed around the Ponticelli brothers, came from Florence. Already in 1964 the band was created by Ugo and Raffaele Ponticelli. At times, the later Campo di Marte drummer Mauro Sarti belonged to the group. In the early 1970s, a stable line-up formed with the third Ponticelli brother Vincenzo on bass, Stefano Melani on keys and Giorgio Di Ruva on drums. Except for a few beat and pop singles, the band never released any recordings. In the mid-'70s, the group seems to have disbanded.

At the beginning of the decade they had turned to hardrock, covering pieces by the likes of Deep Purple and Black Sabbath, before turning to a more complex organ prog. The band played live a lot in Italy and the core of their shows was a four-part suite that the group committed to tape in 1972. It apparently tells about a man who after a seance turns to metaphysical worlds and seeks salvation in the afterlife, only to find himself in the troubled reality again after a terrible nightmare. However, it wasn't published until 2011. The sound of "Spettri" is what one would expect from such an archival discovery. Not bad but not good either, with lots of hiss and a channel falling away now and then.

Black Widow, the label which has released "Spettri", doesn't skimp on words in the accompanying booklet to try and describe the whole thing as progressive, avant-garde (from a contemporary point of view) and experimental. What we get here is basically a very typical organ (proto) prog, which was not all that rare at the time. Electric guitar and Hammond rock on a blues base, sometimes edgy, sometimes more solemn, more or less powerfully driven by the rhythm section. In addition there are some powerful-plaintive vocals in Italian. Deep Purple (to name just one example) are not far away, as well as several other proggy hard rock bands of the early 70s with a dominant organ-guitar duo. The Spettri go about it in a slightly more sacred, complex and proggy manner, but the music is (was) not particularly original or novel (at the time). Still, the Italians can bear comparison with anyone.

"Spettri" is a pretty decent archival document, which unfortunately has come almost 40 years too late. Had the album appeared back then, produced properly and with a few instrumental additions (perhaps a flute), the band could have scored a classic (perhaps not unlike the one album by their Florentine colleagues Campo di Marte). This way the whole thing is probably only an object for absolute Italo completists (or dignified grizzled former fans of the band)!"

Ah yes - much better! Thanks for doing that!!

I see a short write-up on Spettri has appeared on italianprog.com (in English!).