News: Baumann/Koek to be reissued on Bureau B 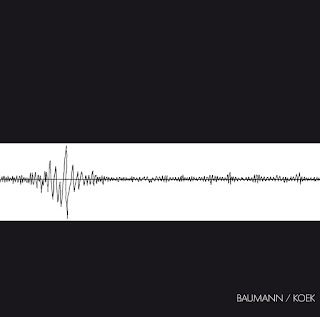 I have to admit I'd never heard of this one before. But CDRWL contributor Eric sent it over, and it indeed does look like something we'd be very interested in. Bureau B continues to be the leading light for all things German Electronik.

Label data: "Baumann/Koek is another hitherto undiscovered treasure of German electronic music, the only album by the electronic music pairing of Wolfgang (not Peter!) Baumann and Ata Koek, both from Kempten, Bavaria. It was mixed in Conny Plank's studio and distributed, without a label, by the duo themselves in 1978. The music owes much to the Berlin School: layered sequencer patterns, swirling chord tapestries, a computer beat here and there. Oriental elements or hints thereof add a particular charm to Baumann/Koek, available now for the first time on CD (+vinyl and download)."

"Rumours persist that Peter Baumann of Tangerine Dream is behind the Baumann/Koek project. Indeed, the music might bear a certain resemblance and the song entitled “TD-Mem” might be seen as a clue. But the rumour is just that, a rumour, with no bearing on the truth. In actual fact, Baumann/Koek can unequivocally be identified as Wolfgang Baumann (no, not the MPS record cover artist), born in Kempten in 1950 and his friend Ata Koek (Köktürk, to be precise), born in Istanbul in 1956. Wolfgang Baumann was 15 years old when he learned to play the electric organ. Some ten years later, he had grown tired of the limited range of sounds the instrument offered and he sold it on the spot. Wolfgang and his friend Ata were determined to explore new tones and musical structures— with a synthesizer. Together, they made the trip from Kempten to Bonn with the singular aim of visiting the legendary Synthesizerstudio Bonn, the very same store where Kraftwerk and countless other electronic icons went shopping for their equipment. The duo purchased a secondhand ARP 2600 and immediately began experimenting with the synth. They soon realized, however, that they needed more gear to create the music they dreamed of. Before long they had added an ARP sequencer, a Solina String keyboard and an EKO Compurhythm drum computer to their arsenal. Last but not least, they acquired a four track recorder and were ready to commit their music to tape. Without a record label to back them, they pressed up 1000 copies and paid the production costs themselves. Having recorded all the music on the four track machine at home, the pair went to the expense of booking Conny Plank’s studio for the mix. The album was well received and the Swabian wholesaler Jaguar Records stepped in for worldwide distribution pressing another 5000 LPs. Japan proved to be a particularly popular territory, with radio stations picking up on the record. Sadly, Jaguar Records went bankrupt shortly afterwards. Baumann and Koek were disinclined to take on any further financial risk and decided against a follow-up record. The music clearly references the Berlin School: a hypnotic maelstrom of sequencer patterns and swirling tapestries of mostly minor chords, underpinned at times by a computer beat. What really sets the music apart from comparable productions is the subtle influence of Arabian tonality which saw Ata Koek consciously introduce just a hint of Oriental flavour. If Baumann and Koek considered their “modest” equipment to be a hindrance, their music sounded all the better for it. There is a raw, unpolished quality to the tracks, a clarity which draws the listener closer, far more so than the bombastic productions of contemporaries like Tangerine Dream, Klaus Schulze et al."
Posted by Purple Peak Records at 9:39 AM

Good find! I had a listen to the teaser on Soundcloud and this sounds right up my street. I see we have to be patient, though: not out until 29 January...