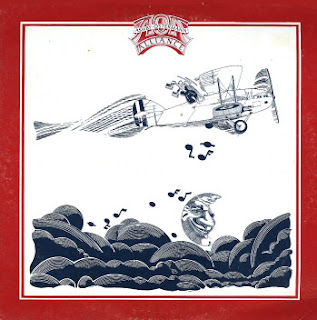 Another fine entry from MM, Chicago based Ashby Ostermann Alliance is a good example of early 80s fusion mixed with a strong rock aesthetic. This latter element is often missing in the progressive rock & jazz rock genres. In fact the AOA album doesn't give that indication early. It seems to be pointed in the direction of Latin Jazz, but about midway through Side 1, the guitarist begins to take over. Then the compositions take on more complex forms, and before you know it, you have a mighty fine progressive fusion album on your hands. I wouldn't be surprised to hear that these guys knew or played with fellow Chicagoan group Proteus.

Dusty Groove, the superb record shop from Chicago whose primary focus is in the soul-jazz-funk-fusion fields of music, has recently had a used copy of AOA album in stock. Their quick review says "Obscure fusion from the Chicago scene – played by a group with heavy guitars from Vince Ashby and wailing keyboards from Dennis Ostermann! The sound is jamming, but with some nice tight moments that almost get funky." That's pretty much spot on.

Hard to grab a story line here, but I think this one would go down a storm with the obscure fusion LP buying community. Neat cover art too.

That looks like the kind of record you can find in a used record shop or at a record show, for a mere $1. Very few people know and collect music from 1981, hence the price. And checking an old ebay listing, indeed a copy of it went for $1.09 (last summer). Another copy (more recently) sold for $69.99! go figure!

Exactly. The copy that sold on ebay was immediately after my post. I saw that one myself, but I didn't want to pay $70 for it. It might be awhile before you see another one at $1.09. I think the early 80s fusion scene is just now being discovered, so the days of these albums being under $5 are starting to close. The only reason these albums are cheap now is the lack of demand. But there's also no supply, so it's only a matter of time the price goes up. Especially as they are being discovered to be pretty good!

LOVED seeing and hearing these guys play -- great people and amazing musicians. My ex's band director was Dennis Ostermann. This still gets regular rotation on my playlist. Stellar engineering & would certainly stand up against any audiophile pressing.