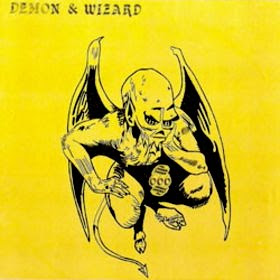 Took a few days off this week from the stereo, but managed to make some progress last night. We still have one monster album to talk about and my LP is on the way now. Of the 3 (including Thomsett and Phase), this might be my favorite of the lot. More to come on that. Also, tomorrow I'll be reporting on an album that I'm certain fans of early 70's Miles Davis will freak on.

Today's post is once again courtesy of the AC. A very interesting album. Many of my initial thoughts were the same as AC's, so let's get his take first this time: "Hailing from Reims, this duo's lone LP, a private press released in micro quantities, is seemingly all but forgotten by time, representing perhaps the deepest, darkest recesses of the old French underground scene. In the unlikely scenario that you were to happen upon this relic collecting dust in some tiny French record store, your first thought might be that it's an unknown Venom style proto-black metal record, what with its ultra-primitive hand drawn cover that looks like something straight out of an old Advanced Dungeons & Dragons module, and track titles like "Medieval Holocaust", "Shaking the Gates of Hell" and "Black Witch". But what a shock you would be in for as the needle drops, revealing a shadowy aural landscape that would serve as the perfect soundtrack to some weird 70s horror film. Haunting, folky acoustic guitar passages blend into classic French electronic prog, with gurgling analog synths, bass, electric guitar, and occasional vocals, creating a strange, occult atmosphere that will stay with you long after the music has stopped. Admittedly, the execution is a bit amateurish at times (these guys were probably mere teenagers when this was recorded), but in a way that only adds to the charm. Definitely worth hunting down for fans of French deep underground sounds and experimental krautrock."

Haha - that was my first thought too: "Black Metal" by Venom. As an old metal head from back in the day (as in 1979-1983), I can only imagine my look of horror as I dropped the needle on this album, thinking I'd uncovered an underground metal masterpiece.

Demon & Wizard fall in line with many of the obscure acts of the French underground of the late 70s and early 80s. I would have expected this to be released on the D.I.Y. FLVM label, as it has that vibe. Or perhaps Disjuncta. The sparseness created by the acoustic guitars and synthesizers had me thinking at once of Images, Kennlisch, Lourival Silvestre, Flamen Dialis and even early Richard Pinhas circa "Rhizosphere".

Another nice find from the AC!

Priority: 3
Posted by Purple Peak Records at 7:59 AM

Wow! You were talking about impossible searches in a previous post...this has been one of mine for a while now. From Reims (the land of Champagne) they have also been compared to Mike Oldfield, Ash Ra Tempel and Amon Dull II...
Great find!

I mean the AC has some amazing resources right? All the credit goes to him. I never had even heard of this album before. I would caution that Oldfield, ART and ADII are waaaay more professional than Demon & Wizard. The bands I mentioned are definitely more in line with what you'll hear on this.

As always - thanks so much for your comment! I have a lot of your stuff still on the hard drive. Hope to move to disc soon!

He sure does :)
Like I said I have been searching for that one and never really had a chance to do the comparison myself...Flamen Dialis, Lourival Silvestre, Images and Kennlish sound pretty good to me as well :)
Always a pleasure reading you!

Thanks for letting us know about this album... wow, sounds great! I really wish someone would post rips of some of these records online, because I bet for the most part it'll be a hell of a long wait before anyone reissues them. Certainly great to hear that some of the stuff you mention does get reissued in the end, but something like this could well go on being unavailable till the day we die...

Hello, I am one of guitarist of demon and wizard he needs to know that this record(disk) exists only because we were collectors of record(disk) and what we wanted to have one record(disk) of us in our collection (thus fact has the house with a minimun of means " guitars and synthe crumar mixing desk boss 8 tracks ") just for the funny 100 copy exist