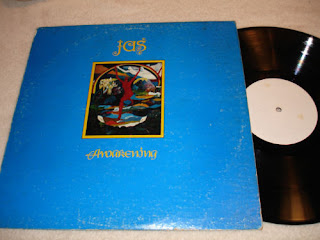 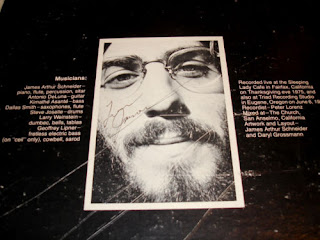 OK - we have a big announcement coming up on Monday - and it features one of the 2 albums I've been hinting about for days now. That LP arrived in the mail today, and I want to hear it one more time before posting. I know I won't get to it tonight, so it will be tomorrow, with a post on Monday. Exciting stuff. And it will be wrapped together with a CD reissue announcement. Yes, that's right, a total superb unknown LP with a CD reissue all at the same time! So everyone will have a chance to own it soon.

In the meantime, let's cover off on this major rarity recently sent in. Now this one is wrapped in an interesting story (perhaps only for me LOL - so you can skip a few paragraphs if you only care about the music). As I may have stated before, I started compiling "curiosity lists" as far back as 1988 or so. I started bringing in mail order catalogs from the back of the pages of Goldmine. Guys like Paul Major (the best catalog writer ever!), Gregg Breth, Greg Pawelko, Zary Smith, Jeff Baker, Walter Geertsen, Willi Oertel amongst many other worthy lists (old timers will remember these guys). I would diligently catalog the unknown titles. Originally written in a notebook, and then later to computer text files and ultimately into spreadsheets. I did that until about 1996 or so, and then I tired of all the also-ran albums that were being hyped up a bit. What we would later call in the Gnosis world an 8 level album (2.5 stars in RYM land). Not terrible by any means, but just average. So I gave it a rest, and focused on either new bands or collecting originals of albums I already knew.

Then came ebay (early 1999 for me), and a whole new slew of unknown albums were thrust upon us. And once again I began to diligently capture anything that looked interesting. I came up with all sorts of interesting "saved searches" on ebay to smoke out even the most obscure album. Over time, even that list was finally exhausted. Except for Jas - Awakening. And that's just how I had it listed. I had some generic music tag on it like "jazz psych with Indian instruments". Years of searching the internet turned up nothing. I handed my curiosity list to Heavyrock around 2005 or so, and even all his well-heeled contacts didn't have a clue. I saw the album listed in other folk's want-lists, with my exact description, along with other albums I had been looking for in the past (and had already found), so I knew the source of the want list: Heavyrock. Or me by extension. Eventually I concluded that I must have written the album down wrong, or missed some key bit of information. After all, I had found 100s of albums just like that back then, and I wasn't doing a deep dive. They were "casual curiosities" to be honest. Maybe another way of me saying I wasn't prepared to pay actual $ for it, but it would be cool to hear it first and then I'll lay down some jack if I like it. But since it never showed up in 10 years of looking for it (anywhere!), I pretty much wrote it off.

Fast forward to November 2011. I rarely scan ebay much anymore, except to look for a handful of LP originals I'm willing to pay $ for. But one evening, lacking anything else better to do while listening to an album, I decided to pull out some of those old "saved searches" I had on ebay and go through them. Most of these were built from 1999-2001, and I still have all of them. Perhaps most surprising is that they even still work (ebay is a case study on how to screw up a good thing). Many of these searches I haven't even looked at in 6+ years.

And lo and behold, on the one time I use an old search - there it was: Jas - Awakening. The ebay description filled in some blanks. Jas is J.A.S. - James Arthur Schneider. The auction featured photos of the front and back cover, which are on display here. Since MM is a huge fusion fanatic, I alerted him to it figuring he'd probably get more out of it than me. So he put in a bid. And lost. Much to our surprise. I mean who else knows this album? Well, all the folks that got a hold of my curiosity list years ago - that's who. Oh well, no big deal. We'll hear it eventually.

Two months later - guess what shows up in my virtual mailbox? - JAS. From the AC! Holy cow! Sure enough he knew someone who won that album. Are you kidding me? What amazing timing for all of us. So let's get his viewpoint:

Not to be confused with the 80s Atlanta-area spiritual jazz group Jas, this recording is actually the work of one James Arthur Schneider, an apparently west-coast based pianist and multi-instrumentalist whose bearded and totally stoned-looking visage adorns the back cover of this ridiculously obscure LP, recorded in two different sessions (live in Fairfax, California, 1975, and in the studio from Eugene, Oregon, 1977). Schneider's group is a seven piece jazz/rock ensemble, with a number of the musicians doubling on various Indian instruments as well. Schneider's acoustic piano forms the backbone of the music, joined by sax, flute and various other background elements over an active jazzy rhythm section. Both sides of the album, each consisting of two lengthy untitled instrumental tracks, unfold in a similar manner. The pieces generally start out in a somber jazzy mode, gradually building in intensity until the excellent and very McLaughlin-esque electric guitar joins in, taking things to another level. The best is saved for last, as the final and longest track rides a darkly intense rhythm, exploding into a frenzied crescendo with some of the most insanely ferocious, coruscating jazz-rock guitar I have ever heard. After this breathtaking peak, the piece further develops with flute at the lead, until eventually descending into an eerie conclusion, with ethnic percussion, backwards sound effects and creepy monk-like vocals. This track in particular is easily one of the most mind-blowing pieces of music I have heard in a very long time, and honestly left me in a state of near shock the first time I listened to it. I could perhaps envision some freaked-out underground jazzers from Germany or maybe Sweden having come up with something approaching this, but for a totally unknown US recording I found it to be highly unusual, to say the least. I would love to see this reissued and exposed to a larger audience, but unfortunately there's no way this would be feasible in its current sonic state. The sound is very raw and unbalanced, and would need a good deal of cleaning up to really make it presentable. But, if Mr. Schneider was to ever resurface and the original recordings still survive, I believe this would be a highly worthwhile project, especially if any additional archival material also exists. Finally, a quick note on the possible reason for the obscurity and scarcity of this album: Based on my copy of the LP, I would speculate that this never actually received a true commercial release, as the LP labels are completely blank, and both the back cover and original protective sleeve bear personal dedications from Schneider himself, indicating that this was perhaps only printed in a tiny run to give to friends, hand out at concerts, etc.

So, if you read carefully, the AC captured a very important point: This album wasn't ready for prime-time. It sounds like a bad demo. It makes Astre's "Foresight" sound like Dark Side of the Moon by comparison. Some of those smoking electric guitar solos are so buried in the mix, you can barely hear them. And yet you can tell he's really wailing. Intensely so.

Obviously, this is a very rare album. Not listed in RYM as of this writing (thanks Isabel for adding!). Mr. Schneider if you're out there - give us a shout!

Priority: 3 (in its current state) Priority 1 if remixed properly!
Posted by Purple Peak Records at 3:46 PM

Thanks Tom!
Love the story...I can use it as inspiration not to give up on a few searches I have also :)