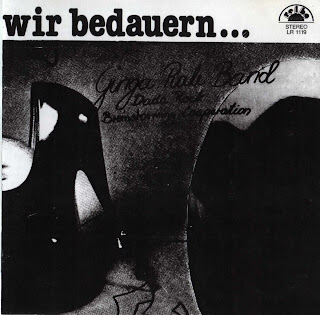 Here it is: Our 3rd and last of the recent amazing discoveries from the bottom of the mine. And that's not to say the dig is over, as I've been handed a few more albums from various sources. Though the advance word is none are extraordinary. That remains to be seen (or heard) of course.

This is another one courtesy of our good friend The AC. Quick research over at RYM shows that fellow explorer and Gnosis mate Lev had already landed on these shores. He promised a return visit, but he knew he'd found gold that's for sure.

We've said this many times before, but it can be somewhat mind-boggling that an album this good can be so deeply buried for so long. We've certainly turned up albums that are just as rare - but they may be more obviously flawed or teetering on the fringes of the genre we love. But Ginga Rale Band's debut is the kind of album that is likely to have wide appeal. After hearing it for the first time, I wanted an original LP immediately. I braced myself for the inevitable sticker shock. That collectors knew about it already, and the proverbial arm and leg was the asking price. But I was pleased to find one online for under $100. Not cheap to be certain, but it could have been 10 times that for all I knew. It took a long time to seal that deal, and thus the extended delay from point of first hearing (early December) until reporting here.

Musically, what are we talking about anyway? The AC introduced them to me this way: "Led by keyboardist Pipi Furz and guitarist Rainer Hochrainer, this virtually unknown Austrian group conjured up something truly amazing here. The backbone of their music is a kind of loose progressive jazz-rock of the distinctly "kraut-fusion" variety, but that doesn't really tell the half of it. Long, sprawling tracks unwind in a non-linear fashion, with all sorts of unexpected twists and turns, bizarre vocal interjections and sonic detours, creating an unsettling and distinctly surreal atmosphere that hovers over the entire album like a weird mist. Wild, reckless creativity and delirious imagination abound, entirely at odds with the standard funky fusion and symphonic prog that dominated the Germanic scene of the time. These guys were on too strange a trip to ever think about compromising or playing it safe, describing themselves as a "Dada Rock Brainstorming Cooporation" right on the cover. If this album had come out of 1972 Berlin, it would already be legendary. But emerging from this particular time and place, it never really had a chance. A lost krautrock classic if there ever was one."

As any reader of the CDRWL knows, there were dozens of Kraut fusion albums from the late 70s and early 80s. Some are slick and tedious, others had a raw edge that is highly appealing. But Ginga Rale Band took it a step further concerning the latter point. Not only is it raw and complex - the music is incredibly unpredictable and exciting - but there's also this dark haunting cosmic angst that conjures up images of Tangerine Dream's "Electronic Meditation" and Ash Ra Tempel's "Schwingungen" when there are screaming voices present. "Wir Bedauern..." gets wilder and freakier as it goes, almost always a hallmark of a great album.

It would seem obvious the name was a play on the ginger ale drink. And that's been confirmed. There's actually a page on the web about them. The AC took this a step further and added these historical notes: "My German is nonexistent, but with the (somewhat dubious) help of Babelfish, I was able to determine that the band was founded in 1977 in Salzburg as the "Ginger Ale Band". In 1980 they changed the name to Ginga Rale Band, and released "Wir Bedauern...". It seems their "dada rock" concept saw them producing some sort of stage show with film projectors, additional actors, etc, (syncs up with the Austrian guy on RYM who said something like "They held nice open air festivals..."). It seems like after this there were some major line-up changes, and the band took a totally different direction. As you can see on the discography provided by that site, they produced a couple of (presumably private press) singles, which seem to be tied in with some kind of rock opera named "Rock Dream" that they were involved in. I checked around and amazingly found one of these tracks posted on youtube! As you can hear, it's angsty punk/new wave oriented stuff with female vocals, totally at odds with their earlier material. I think this is down to the line-up changes that I mentioned, and this brings up another interesting point. It seems that after "Wir Bedauern...", the band mostly became a vehicle for Hochrainer and his wife. In fact, it turns out that "Rainer" Hochrainer was actually named Paul, and you can also see his rather extensive discography (extending up to the current day) on that site. It turns out that Hochrainer and a couple of the other Ginga Rale guys actually guested on the first Aardvark (the Austrian one, obviously) LP, an album I remember hearing a long time ago and not liking at all (stylistically all over the map, from what I can recall). Anyway, after these singles they made an appearance on an obscure Austrian new wave/punk compilation under the name of "Friques Ginger Rale Band".

This sort of punk attitude unfortunately carries down to the track titles on "Wir Bedauern...", and represents the only problematic aspect of the album. There are only two tracks per side, and none are actually listed on the record label itself. But the back cover is clear on what those titles are. I've spent the last 13 years or so of my career heavily involved with Human Resources, so I shudder at seeing the N word. It's not clear why they use this title twice (even though they are different songs). The album doesn't appear to be racist in any way, and the content is almost entirely instrumental. I would imagine any kind of reissue would have to at least address this within the liner notes or even a renaming of the title(s). Some may say we are all too politically correct for our own good, but I could see many more folks being just flat out offended by it (including me frankly).

Back to The AC's historical notes: "Finally, in 1984 "Information" was released, and then it seems they disbanded. I had heard that this later LP was in a Germanic polit-rock/agit-rock style, but based on the album's entry on that site and the style they had already been playing in for the past 3 years, I'd say it's probably more like a new wave/agit-punk mixture. Obviously well outside our interest area, in any case. Anyway, I haven't been able to find any useful links to this point, but I'm hoping that Hochrainer's relatively recent musical activity would mean making contact with him is still possible, hopefully leading to some interest in a Ginga Rale Band reissue or archival release."
Ginga Rale Band is a bulls eye for those that love the German Kraut fusion style, with the added bonus of successfully re-creating the atmosphere of the edgy cosmic Berlin-styled Krautrock of 1971.

Priority: 1
Posted by Purple Peak Records at 8:41 AM

I had a hunch that this was the album you were going to write about. I read about it a while ago and saw it for sale (it was a swiss dealer, right?), thought about it but decided not to (a quick check on popsike showed a copy that went for $25 or so, back in 2009). Anyway, It's on my want list now.

Yep - that's the one Bogdan. Hopefully you can secure one for $25 soon!

Thanks for the comments guys.

Better find a copy soon. Now that you've sung its praises I'm sure the price will go through the roof :-)

$25...Yeah..Sure!...After your excellent review, the price of this will go through the roof!!..I've sent all my record contacts in Austria on a hunt already!!

Happy to hear you dug this one, and thanks for calling me out from the woods :-) I believe I'm indeed the originator of the hype here, as I remember sending a CDR copy of this album to a lady from Alaska who seems to be a close associate of your friend AC (at least she mentioned that she's in touch with a real big collector of obscure stuff, and it seems highly improbable there are two guys like that in such a remote land!).

Anyway, I echo all your sentiments, and I blame myself for spending all of my money while in Vienna *before* I saw the original LP in a shop. It was priced at about 40 EUR or so, but sadly I didn't even have that left, so I still don't own a copy myself apart from a CDR made by a friend from Moscow (he's more of a beat / psych collector btw, so I'm still hoping of wheedling it out of his possession, but you just made it highly unlikely with your glowing review LOL).

There's also a sad personal story related to their second one, "Information" - inspired by "Wir Bedauern...", I bought the follow-up on eBay for as much as 5 Euros only to have it arrived broken in three or four parts due to a postal mishandling! So, naturally, it's impossible to listen to, but at least I'm now a proud owner of the original cover of "Information".

Yes, nice work on this one! Always glad to push forward your new discoveries if possible.

Oh man - what a bummer about Information! Though it does appear to be out of scope. If you hear it different (obviously not from THAT copy), please let me know!

Thanks again for the help!

I just realized that I didn't give my signature with a comment above, and I'm not sure you know me under this weird, Comus-inspired blogger screenname - so just in case, that's Lev from Gnosis posting :-)

Haha - no, I knew it was you. I picked up on the Moscow reference and writing style :-)

I wasn't sure if you were going undercover or not. LOL.