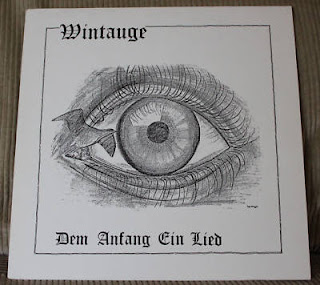 I was really hoping to report on one of the other "big 2" I have on tap, but there's been another delay, so let's cover off on another major rarity. I was first tipped to Wintauge by Gnosis friend Lev, who has an encyclopedic knowledge of German music. And leave it to the AC to track this one down for us. I'm grateful to both for the knowledge and the resources they possess.

To simply put: Wintauge are a rock band that sings in German. A style of music that is actually known as Deutschrock in Germany itself, and which is distinguished from Krautrock. What makes the band interesting, are the instrumental portions of the songs, which have a strange 1960s aura - primarily due to the use of primitive keyboards and guitar tones. So imagine the music of late 70s Novalis but sounding like Oratorium.

The AC comments: "Private press mixture of anachronistic prog-folk and spacey, slow moving symphonic rock, quite typical of the late 70s/early 80s German scene. Generally well done for the style, if a bit amateurish at times."

In reviewing Popsike, it appears this album consistently sells between $300-$400. So it's rare even in Germany. Great cover art.

The below video is an absolute hoot. To me it looks like the band invaded a department store for a TV shoot. A truly low-budget early 70's PBS-styled production. The stilted crowd looks completely bored, ready to pounce on the first Warsteiner offered. The lead singer appears to have been a castoff from a failed SWR bid to license Hee-Haw. Maybe these guys knew Akropolis? Stay for the entire 3 minutes (actually the music is quite good on this one), and look for the banner being hoisted up. What a riot.

Posted by Purple Peak Records at 7:47 AM

Two problems one the price which according to popsike goes north of 300 Euros and two the sheer rarity of it...only 100 pressed apparently!