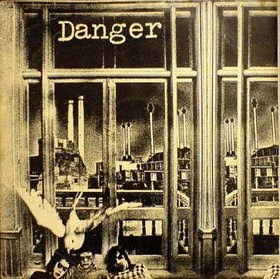 Still plenty of items to go through here. Perhaps some major new discoveries to report on. We'll see. In the meantime, let's get back to the archives. These are albums in the main list that I haven't reported on prior for a variety of reasons.

I first heard about Danger in the early 90s from one of the rare LP catalogs I was receiving back then. The list compared Danger to Agitation Free. Subsequently Danger quickly became a top want and I searched high and low for it to no avail. Eventually I received a cassette of the album. OMG. Agitation Free??? I don't think so! Alright, but just because an album doesn't meet an unreasonably high expectation, doesn't mean it's bad either. However in this case, at least for my tastes, I'll validate this one is not very good at all.

Danger's one album is an Avant Garde / Systems jazz music made with organ, homemade synthesizers and tenor sax. Great atmosphere created by the organ is ruined by incredibly annoying and atonal saxophone honks and bleeps. Takes the patience of the Biblical Job to get through it all. For fans of extreme music, this album remains much sought after. For the rest of us, it's a mere curiosity.

Priority: none
Posted by Purple Peak Records at 7:16 AM

Glad to see I'm not alone :)
I picked up the album based on a comparison to Soft Machine but never got into it either