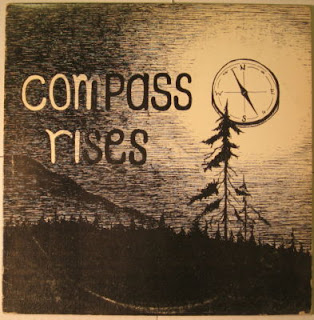 While still waiting for "that" LP to arrive, let's go dig into the bag of rarities that the AC sent across last month. This one is definitely out of range for the CDRWL, but I still found it a very pleasant jazz record. As the AC notes, it's almost rare to hear a US jazz band use this much restraint during the early 70s. "Brit-jazz" is an apt comparison. This is the kind of record my wife really likes. Not squeaky and squonky experimental jazz nor the new age slop gloss that was to come around later in the decade. Just well played jazz, with a rock edge. Nice.

Compass were from upstate New York and recorded the album in Marblehead, MA (NE of Boston). According to data I found on the Net, it appears the band is looking into reissuing this title themselves in the near future. You will often see this band listed as Compass Rises, but it's definite the band is known as Compass. This group is not related to the American blues rock band Compass, who released one album in 1970.

The AC says: "Compass is an upstate New York jazz group who released this lone obscure LP, which was actually recorded in Massachusetts and pressed in Cincinnati. This one sort of straddles the line between electric modal jazz and early jazz-rock/fusion styles. But unlike many albums of this ilk from the early 70s US jazz scene, this lacks any of the free and freaky elements that were in vogue at the time. Instead, it embraces a more reserved and melodic sound, reminiscent of certain "brit-jazz" works that were being produced across the pond in the UK. The quality is quite consistent throughout, but the lengthy track "Schizoid" from side two is especially effective, with its echoing Fender Rhodes and plaintive sax creating a haunting, late-night vibe. Speaking of the Rhodes, anyone who (like myself) is a big fan of this classic instrument should consider this a mandatory listen, as the album is absolutely drenched in it from start to finish. Nothing mind-blowing here, but a very enjoyable effort nonetheless."

Priority: none
Posted by Purple Peak Records at 7:21 AM