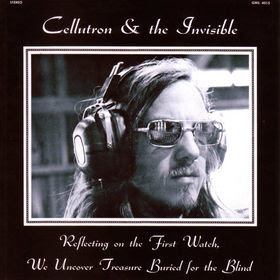 Cellutron & the Invisible - Reflecting on the First Watch, We Uncover Treasure Buried for the Blind. 1978 Green Mountain.

Alright, back again. Work is beginning to dominate all aspects on my life. I sensed that at the beginning of the year. Desperately trying to keep up with the hobbies here. We still have one monster album to report on from the AC's January batch. That LP arrived in the mail earlier in the week (I bought one immediately) and I want to hear it one more time before posting. Hopefully tomorrow.

In the meantime, let's go back to the archives to kill time. This is proving to be a good exercise, as I hadn't added my rating/review for this title to RYM yet, even though the entry has been there for years. Just an oversight on my part.

I remember first stumbling upon Cellutron & the Invisible in an obscure Little Rock, Arkansas record store back in 1992. I thought I'd found the American Heldon, or worst case, Ilitch. It had that right look! I couldn't wait to get home and check this puppy out. But alas it was not to be the case. It's a rather dull and static electronic album, but with a few guitar touches that saved it from being a complete yawner.

Priority: none
Posted by Purple Peak Records at 7:09 AM

Labels: Cellutron and the Invisible, Priority none

Hmmm...I wonder what that "monster" is...Are there any more copies out there, do you know?

Hopefully tomorrow I'll get the post up. Depends on what I get done tonight. Not sure of availability. I bought the only one I found on the internet. But I never looked for it before, so it may be something easier to find than I would know. It's a European album from the late 1970s.

Can't wait...Is it in listed in GNOSIS?