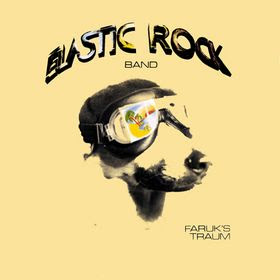 Over at Prog Not Frog, they're featuring a series of albums that we've reported on here at the CDRWL. We've had some fun with that, and I look forward to more reviews from Tristan Stefan.

To turn the tables a bit, here's one that they've featured, but I only had in the main list. And since I'm perpetually behind, I thought it would be a good one to pull from the archives.

As mentioned in the JAS thread, I had bought a variety of albums sound-unheard on ebay during a period from 1999-2006. This was one of the last ones I picked up. It's a decent record for certain, but I did decide to sell it back in an auction about a year ago.

My brief, nonchalant review stated simply "Light and breezy Kraut fusion, with some good guitar leads. Not one to completely overlook, but hardly essential." Even after listening one last time, to see if I really wanted to sell it, my opinion remained unchanged. And off it went.

The review from Tristan Stefan at Prog Not Frog is much more enthusiastic: "Though it's described as average by many in the community even an average from this period is pretty good music. And this is almost to the level of the incomparable Missus Beastly (in my opinion!). To me standouts are Glolock's Dance with its definite National Health chord changes and Hopperesque bass soloing, the ensuing title track with its very Chick Corea keyboard patterns moving to acoustic piano then again electrified, and the first 2 tracks on the second side. Notice in particular how well composed these progressions and patterns are as compared to the average fusion record.On "Point of View" we have that heavenly breeze of space-synth sound performing arabesques above a guitar melody. Suddenly a minor chord appears, out of the blue as if a shadow. "Fur Carlos" uses the same keyboard as Carol Ann from Soft machine 7 (or is it 6), the almost pure tonal bliss of outgoing spacecrafts to Plato's world of perfection and ideal forms, for me. An interesting part of this track is the riveting chords being rapidly and gently strummed on electric guitar behind the melody. (That fast beat under slow melody combo has been overused to death in TV soundtracks to convey an aura of mysterious suspense.) Later the track moves into traditional and overdone jazz rock territory. At least the first minute of this one is worth listening to!Hope you can enjoy this lost lost classic of the genre."

For the CDRWL, Missus Beastly (1974-) is sacred ground, and I unfortunately didn't appreciate this album at that level. But I'd rather folks see the positive side of things - and it's nice to see this well-written review offering a different perspective than mine.

Of interest to collectors, as far as I know Faruk's Traum is the only album on the Schneeball "II" label. To me, it sounds like many of the artists on the main label, so not sure why there was another designation for the label.

Posted by Purple Peak Records at 8:36 AM

hey-- I said almost -- I didn't say, at the level of missus beastly! lol

Like TS, I've been semi-obsessed with the wish list, which has led me to quite a few previously undiscovered gems (Yaraandoo being the latest example).

Thanks Chicopee for the comment and you're continued participation on Gnosis!