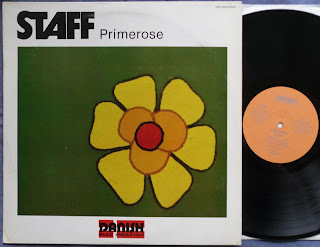 The AC's original notes: "Following on from the recent Matao entry, here's a directly related obscurity that I was quite pleased to come across. After Matao broke up, Engin himself went in a more decidedly jazzy direction (akin to Okay Temiz) with his Atilla Engin Group and the big-band Tyrkis. However, it seems that Matao's guitarist Svend Staal Larsen was still keen on pursuing the middle-eastern tinged progressive jazz-rock style they had already established, so he formed another band called Anatolia. Unfortunately, they don't seem to have actually recorded anything, but shortly after this he founded yet another group, Staff, who did manage to produce this one LP before disappearing themselves. And as indicated, this album is indeed something of a direct lineal descendant of Matao, being instrumental jazz-rock/fusion of a very high standard, still with the occasional middle-eastern influences and a slight progressive touch. Of course, this being a product of 1984 (right at the tail-end of the classic jazz-rock movement, even in the European underground), you will have to grit your teeth through the distinctly 80s production values, but if you can deal with that, it's all smooth sailing. Similar to Matao, this is a very focused and consistent effort, around 45 minutes of solid instrumental jazz-rock, with no real dips in quality or experiments gone awry, and at times Larsen really lets it rip with some fiery soloing, just like in Matao. And then Engin himself even joins in on the last track for a nice piece of moody ethnic fusion. Considering the time period, it would probably have been impossible for them to live up to the lofty standards of the original, but this is really a pretty satisfying listen in its own right, and definitely worth a shot for fusion fanatics."

Priority: none
Posted by Purple Peak Records at 10:08 AM