News: Novalis Flossenengel to be repressed by Made in Germany 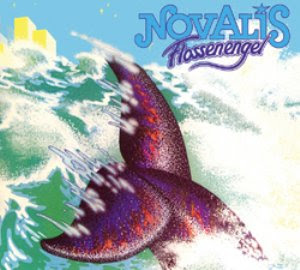 As stated before, I don't do a very good job of keeping up with OOP titles, but if I do see a reissue announcement of an album that I know many folks are looking for, then I'll try to note it.

So with that, the excellent label Made in Germany has announced their intention to reissue Novalis' Flossenengel (it was pressed for CD originally by Castle in 1991). Made in Germany is the label that has more or less filled the void left by SPV/InsideOut.de

For many this was one album too late for Novalis. Some will say it was their last hurrah. While for others, it represents their pinnacle achievement.

Pasted here is what I would guess to be the liner notes. Thanks to Green Brain for this info:

"After their very romantic albums Vielleicht bist Du ein Clown or Sommerabend the album Flossenengel, published for the first time in 1979, depicted a cesura for Novalis. Hartwig Biereichel remembers: "This album marks our creative peak. The dreamy and naive phase ended with Flossenengel. It is a concept album - and each song builds on the preceding one. Moreover, for the first time we had shorter tracks. In contrast to our previous monster tracks, the songs were more condensed. What many pleased and others criticized: With this album we became compatible for the radio for the first time. The songs were rougher but at the same time more rhythmic and structured." Flossenengel deals with Atlanto, a whale who fell into captivity and almost dies because of it. Yet in the end, the fisherman who had captured him releases him into the ocean. Long before Hollywood turned this topic into famous movies such as "Free Willy", German romantic rockers dealt with the threatened species. The story is told in ten songs and starts with the instrumental song called "Atlanto". The track combines the music with original underwater recordings of whale songs. The two minutes song "Ob Tier, Ob Mensch, Ob Baum" concludes the album which symbolizes the solidarity between human kind and nature. Just like in the starter song the listener is able to hear integrated whale songs. Lutz Rahn about the longplayer from 1980: "With Flossenengel we made an album which deals with the relation of nature and humans. The human being is closely intertwined with its natural environment. If he disturbs it, and he is close to it, he deprives himself of his livelihood. We wanted to make people aware of this problem." Hartwig Biereichel: "Problems that we cannot avoid, attack us from all sides. This theme is what our lead singer Fred Mühlböck tried to convey in his songs. We kept loyal to our musical style, melody still ranks first, we only cut dispensable padding and do no longer play any mammoth tracks." Even after 30 years, the theme of this album is still highly relevant. Back then Novalis were downright prophetic. Hartwig Biereichel: "Sure, this makes us happy, even though the cause is rather sad. Even back then one could foresee what kind of ecological catastrophe seems to develop. It was also clear that the human greed would steadily grow. This has not changed. We still do not respect nature, even knowing that resources are limited. There will come the day when there will be no turning back and we will leave the next generation in a total chaos which cannot be fixed." Being asked if the band would describe their music as romantic and why they sing in German, Lutz Rahn says: "Those are categories of the advertising industry. We do not want to be put into some box. Our music has always been individual. I conceive it as delicate. We sing German because in our mother tongue we are able to express ourselves best. Furthermore, our lyrics are understood anyway. Language barriers when we sing German in other countries? I do not see that no longer so dogged. The general reservations against foreign languages are decreasing. In Japan for example we have sold 50.000 albums." Hartwig Biereichel: "In 1979 we were distinct in a way that we had a high value of recognition and a very unique profile - take our singer Fred Mühlböck who had a very unconventional way of singing and a very arbitrary form of interpreting the lyrics. I do think that back then, Novalis could indeed be called a brand. Our albums were bought because people knew exactly what to expect." However, the idea to come up with a concept album about an agonized creature was not a publicity stunt. The band also took this subject on tour. During the show on a huge stage backdrop they projected a film of whales in their natural habitat. For the Flossenengel tour that had the motto "The Sea must live", next to the driver and the tour manager six engineers went with them on the road. The nearly two hour performance was spectacular as well. An enormous inflatable blue whale of 15 meter length hovered over the stage. This dark whale was a donation from Greenpeace and in all those spotlights it looked very majestic - similar to Pink Floyd's inflatable pig. Further, Novalis presented a perfect light show consisting of 84 spot lights, strings of lights, crackers and florescent objects that really stimulated the audience. At their concerts after a short time the spark lept over onto the crowd taking on "nearly ecstatic proportions with several visitors" as the press noted. The Trierische Volksfreund wrote: "The tracks of the album Flossenengel showed the band at their best: impressive sound collages alternate with dialogues between easy plucked guitars and piano". The Hildesheimer Allgemeine Zeitung held that "the journey through their music never had been that good as in this year. The five musicians from the river Elbe finally succeeded in presenting their songs on stage with the proper drive. Because of the improved instrumental arrangements the partly simple harmonies suddenly worked far more exciting and interesting than before." And the Saarbrücker Zeitung describes Fred Mühlböck's stage act like this: "Mühlböck plays the cross flute so beautifully. Not only in this he makes us strongly think of Angelo Branduardi, similar to him he jumps, runs and dances all over the stage." The Siegener Zeitung writes: "Mühlböck fiddled the violin, cried with his harmonica; he rocked his double-neck guitar, wandered as a clown through the enthusiastic audience or went to crawl under the stage. The dragging rhythm by drummer Hartwig Biereichel, the suffering bass from Heino Schünzel and Detlev Jobs' comforting guitars conveyed the unknown width and the soundless depth of the ocean." Stephan Schelle Tracklisting: 01. Atlanto 5:12 02. Im Brunnen Der Erde 4:28 03. Brennende Freiheit 2:20 04. Im Netz 8:38 05. Flossenengel 3:26 06. Walzer Für Einen Verlorenen Traum 3:27 07. Sklavenzoo 6:00 08. Alle Wollen Leben 4:45 09. Rückkehr 6:00 10. Ob Tier, Ob Mensch, Ob Baum 1:50 "
Posted by Purple Peak Records at 8:12 AM

Thanks Tom for the good news! I think this album is underrated personally and will welcome a good CD print of it.

The old pressing is nearly impossible to find. If they are indeed repressing the original CD (no remastering) that is good news since it sounded pretty good as was. A remastering almost always ruins things with compression, NR etc. unfortunately.

I have the older 1991 Castle Legends CD, And would like some help getting it posted on Discogs.