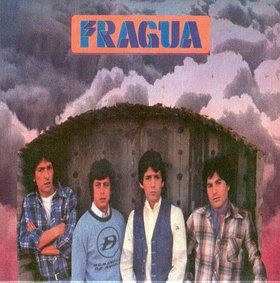 Another one from the archives. In the early 90s, I did a deep dive on Spanish progressive rock albums. The LPs were reasonably priced, and many were just coming out on CD for the first time. Fragua never made it to CD, but the LP could be had cheap back then. I traded it years ago. I got a chance to hear Fragua's sole album again a few years back, and the below represents that listen.

There was an exciting movement from the mid to late 1970s in Spain that mixed both rock and flamenco music. Especially popular in the southern reaches of the country, the style became known as Rock Andalucia. Some of the bands, such as Mezquita and the early works of Triana and Medina Azahara added progressive and heavy rock elements for an exciting recipe. Fragua, on the other hand, were more typical of the popular music side of the movement. In effect, with Fragua you'll hear traditional flamenco music combined with Spanish pop. There are, though, a couple of truly excellent challenging cuts to absorb. A good album, though not one of the better ones for the style.

Priority: none
Posted by Purple Peak Records at 7:58 AM

Hello. I found your blog through a comment on rateyourmusic.com about the Clearlight 2xLP "As Above, So Below." I wrote about the book that Clearlight based this album on (The Kybalion) and am looking for any further info on the band and album. Please email me at philip(dot)deslippe(at)gmail(dot)com

Thanks for your time.