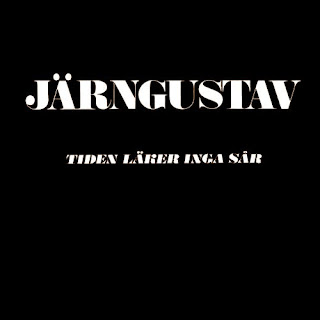 Another big time rarity that I've had on a Curiosity list forever. And The AC once again managed to find a copy (thanks again)! Like the Leong Lau record we just spoke about, this too arrived sans description. After one listen, it was obvious as to why.

Järngustav is blues rock, plain and simple - all sung in Swedish. Side 1 contains five short, depressing tracks. Side 2 is a 17 minute blues rock jam, though not very inspired, or particularly rocking. It does kick in gear - finally - at about the 15 minute mark. I love Swedish blues rock, but you won't be confusing Järngustav with November or Saga anytime soon. It's easy to understand why this one has stayed so obscure.

Progg.se, the excellent online Swedish rock encyclopedia says this about Järngustav (with assistance of Google Translate): "Järngustav (Iron Gustav) formed in Gavle around January 1978. Their LP is published privately and among the rarest discs from Sweden. The disc is said to offer heavy progressive rock of which the title track covers an entire side of its 17 minutes of playing time. The disc was recorded and mixed in Mora Träsks own studio in Gävle between December 1977 and August 1978. One of the songs from the LP is also in the various artists collection "Now, Nah Ends"." In further reading the comments, it doesn't appear anyone on the site had actually heard the record. It's apparently much sought after amongst fans of the Swedish underground. It's very possible that this album may strike a chord more to the locals than on the international scene.

A former ebay auction, courtesy of Popsike, says: "Way cool and primitive Swedish band with raw crude guitars, crude vocals that are a gas, has that private messed up lost garage sound all through, one side is songs with doses of old rock, fuzz, punk, even in the garage cool snotty vocal ineptness, and best of all is side two with their epic side long track "Tiden Laker Inga Sar" (also the title of the LP) with many sections, spacy meandering to heavy rock, ambitious in a very basic idea of being progressive, never loses the amateur messed up edge. These guys are wonderfully far from sounding slick." I think the description is accurate, though I don't share the enthusiasm.

About the only other band I can think of that reminds me of Järngustav is Kontinuerlig Drift. If all this sounds appealing, then Järngustav is worth seeking out.

Priority: none
Posted by Purple Peak Records at 6:03 AM