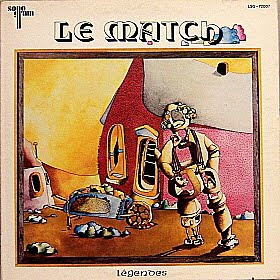 Sometime back in the late 1980s, I met a gentleman from Tokyo at a local record convention here in DFW (he was here on business). We struck up an immediate friendship, and he was kind enough to send me on occasion a progressive rock specialist magazine called Marquee (named for the record store that is still going, and is behind the excellent Belle Antique CD label). I still have all the mags he sent to me (Kaz, you still out there? Get in touch!). Each issue would focus on a particular country and expose a variety of excellent albums, many of them very obscure (especially back then). Issue 32 (dated 1989) was all about Canada.

It was through this magazine that I first heard of Le Match. From my perspective, all I could determine and see was the album cover, year, label and track titles. Everything else is in Kanji. That's right kids. Back in the old days, sometimes purchases were determined by covers, track titles and foreign languages. What a difference 25 years makes eh?

Naturally I asked my friend to help me interpret. He hadn't heard most of the albums, but gave me an idea of the descriptions. The review of Le Match was lukewarm, so I never pursued it. Years and years of seeing it catalogs, I continued to move past Le Match. And the descriptions didn't persuade me either.

Enter SF. He asks where's the Le Match entry. "Ya know, man, I just never bothered with it. You think it's good?". "Yea - see for yourself!" And voila, I had a copy to sample.

As soon as I heard it, I instantly knew the type of music. And it's a style I'm very fond of, and have spoken about it at length here on the CDRWL. That unique genre of music that mixes a commercial AOR sound, but with a distinct Gentle Giant complexity. It's short form progressive rock. The sound that represents the progressive rock landscape of the 1970s American Midwest (and Ontario by extension). The only difference here is Le Match sing in French, which makes sense since they're from Quebec. In that way, I'm reminded of that most excellent band Et Cetera, though Le Match are definitely more geared towards the commercial aspect of the sound, rather than the overtly progressive Et Cetera. So Le Match are a bit of an anomaly for the Quebec scene, and "Légendes" is miles away from the Harmonium / Connivence / Contraction / Maneige sounds that we know and love from the region. "Légendes" is vocal heavy, but features some wonderful violin, synthesizers, flute and guitar, and the compositions are thought out with plenty of complexity to keep most progressive rock fans happy. There's a folksy undercurrent here, but I wouldn't label this folk rock myself (another way of saying, I wouldn't put them in the Barde camp either).

I bought an LP immediately (it's not expensive). For myself, I did insist on buying the original on SonoGram which comes in a gatefold, whereas the second press is a single sleeve.

A current ebay auction has the following description which I concur with: "Overlooked and underrated album by this band made of ex-Nouvelle Frontiere members. This fuses the intensity of Italian prog with lashes of violin and flute to folk rock ala Gryphon, and I also hear a Gentle Giant influence here (GG was HUGE here in the seventies)."

I think this would be a great fit for the ProgQuebec label.

Priority: 3
Posted by Purple Peak Records at 8:13 AM

You delight us again with another great story. Glad you enjoyed it enough to feature it.
Thanks Tom