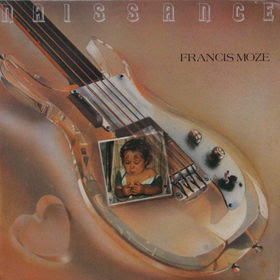 Following on from the Major Surgery post (4 days later, but such is my life), we have another fine record submitted by The AC - this time in the fusion category. Francis Moze is one of many ex-Magma alumni to have pursued a short career in the fusion field. Perhaps the most overt of these attempts was the collaboration of Lockwood, Top, Vander & Widemann, and their 1981 album so subtlety entitled "Fusion". It's not overly surprising, given that Magma were at heart a jazz group right from the beginning. However by the time of "Mekanik Destruktiw Kommandoh", the band had become so creative, it spawned an entire music movement that still survives today: Zeuhl.

Moze was a veteran of the early Magma lineups, and later turned up on a couple of the more fusion oriented Gong ensembles. Thus his one sole album flew under the radar, unlike his bass playing brethren such as Paganotti and Top.

The AC says: "Obscure fusion album by this former Magma bassist. At first glance, this would seem to be quite typical of other such early 80s French efforts from the likes of Francis Lockwood, Raymond Winter, etc. That is, light and glossy jazz fusion with not too much in the way of depth. That's not too far from the truth, but as the album goes on it reveals itself to be above average for this style, with some fairly engaging instrumental compositions and a pleasant overall atmosphere. Worth a look for genre fans."
And that's exactly right, the album really gains momentum as it goes. Personally I'm a big fan of the McCoy Tyner styled staccato piano, and Moze's band utilizes this technique to great effect, propelling the music forward at an exciting rate. I'm rather certain our fusion readers will want to hear this one. Very nice record from perhaps a surprising source.

Priority: 3
Posted by Purple Peak Records at 7:34 AM