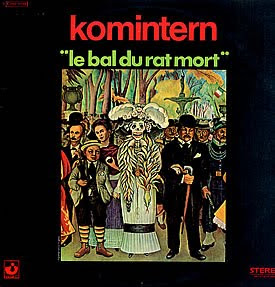 An all over the map type release, with just about every conceivable style being represented somewhere. Avant-rock-cabaret-jazz is about the closest I can come to making any sense of it. Fellow countrymen Red Noise (who Komintern were formed from) and Mahjun are a couple of other references one could point to. A real mystery that this is still not on CD, since "Le Bal du Rat Mort" was reissued on vinyl in the 1980s on Cryonic (the predecessor to Musea). Even though the group was a radical left-wing political collective, there's fortunately little evidence of that here. They just let the music do the talking, as it should be. Had they still been around during the original RIO formation, they most certainly would've been a charter member.

Priority: none
Posted by Purple Peak Records at 7:05 AM

For years i know that Bernard G. from Musea tries to reissue this GEM, no luck so far :-(