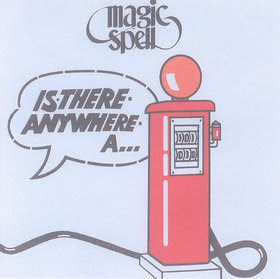 Magic Spell - Is There Anywhere a Gasstation? 1980 private.

Just when you think you've heard all the private press progressive albums from Switzerland, on comes another one. I first heard of Magic Spell through a German catalog a few years ago, but given the title of the album, I just presumed it was another hyped piece of trash, which this catalog was prone to do. But in this case, they were right! This is fastball-down-the-middle progressive rock, with clear nods to early Genesis, late 70s Eloy, mid 70s Grobschnitt and a host of other Swiss bands like Agamemnon, Elysium and Eloiteron. One of the better ones I've heard from this peculiar Swiss scene. Side 1 is particularly strong, whereas Side 2 takes on a bit more of a commercial stance.

priority: 3
Posted by Purple Peak Records at 6:52 AM