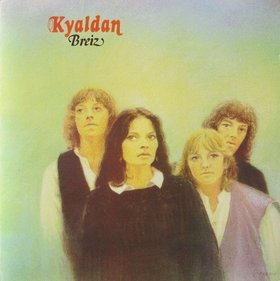 Here's another one from our good friend SF. Kyaldan is basically Breton folk meets electric rock. Some of this album, especially early on in, reminds me of Rush oddly enough (?!). I don't use Rush as a reference much. A very interesting album, though probably a bit too Celtic folk oriented for my personal taste. If what I said above excites your imagination, then you're a good candidate for checking this one out!

SF states it better than I when he says: "Housed in a beautiful gatefold cover on the Arfolk label, Kyaldan explores traditional Breton/Celtic themes like the Dead, Merlin the Fishermen lost at sea...What makes this record special to me is the unique blend of vocals harmonies and the electric treatment of Breton Folk along with a powerful rhythm section. I have always been fond of synths mixed with acoustics and this album falls right in my sweet spot.

It is mostly sung in French with two English songs and the title track Breiz in Breton. All listed as original compositions. Kyaldan is a family outfit backed with a core of strong musicians."

Priority: none
Posted by Purple Peak Records at 4:30 PM