News: Firyuza may be reissued soon on Melodia! 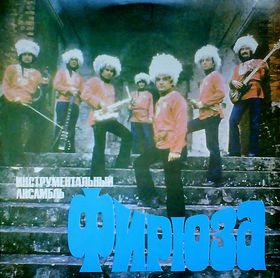 This news comes courtesy of our friend Lev from Russia, and I'll quote what he wrote in Progressive Ears this week: "Earlier this year Melodia celebrated its 50th anniversary. Coinciding with that, they announced that they are going to reissue 50 most wanted items from their catalog. Mind you, this includes audioplays, children's tales and other stuff like that, because having been basically the only music label in the entire country for a good quarter of the century, they naturally had a very eclectic roster of releases. But anyway, three separate polls were run to determine which albums are going to be rereleased. As a music critic, I participated in the critic's poll and added the Firyuza album to a list of works that were put to vote. And lo and behold, it made it into a final top 50 after all votes were counted!"

Outstanding news and nice to see folks we know adding some influence!

Here's our feature on Firyuza.

Posted by Purple Peak Records at 9:05 AM

I would like to track down this reissue if it's become available. Do you have any clue where I can find it? Regards, Even

Unfortunately nothing has been reissued yet!