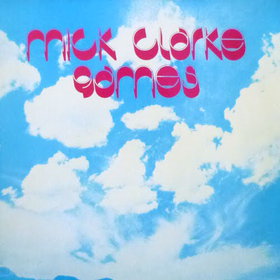 Another quality album sent in from our friend SF. Clarke's sole work is a fine electronic album in the Klaus Schulze tradition. There are two major breaks from the norm though, and both feature guitarist John Carrick. First is the 'Walls of Night', where Carrick lays down some vicious electric leads over the Moog sequencer runs - in the Richard Pinhas or Edgar Froese tradition. And on 'Time is Now', he adds acoustic accompaniment to great effect. These two additions add greatly to this otherwise standard one man electronic musician show.

Album was recorded in Newcastle, lending credence that Clarke is an English musician. It's anyone's guess how he ended up on the Heidelberg based Blubber Lips label (Pancake, Chameleon, Steve Robinson, etc...).

This is a good one for Berlin School electronic fans.

Priority: 3
Posted by Purple Peak Records at 8:05 AM

Thanks Tom for the feature. I love this album. I heard/read somewhere Mick Clake was a member of the Rubettes in the 70's...different fare indeed. Is this the same Mick Clarke?

Hi SF! Yea, I saw that on Wikipedia myself. It's awfully questionable. The Rubette's Mick Clarke was a bass player - and our Mick Clarke is an accomplished keyboardist. I guess it's not beyond the realm of possibility, but I would think Mick Clarke is a somewhat common name and someone tried to tie the two together. I'd like to know more myself!

Thanks again for the CD-R!

No. I am not the same bloke as the Mick Clarke from the Rubettes. I am residing back in Newcastle after a lengthy stay in London when I moved there in '79 and formed the band Naked Lunch. However I am now producing electronic music under the name of Iron Blu and run a record label called Flight Recorder. I also co-present a weekly 'krautrock' radio show on Intergalactic FM.
Here's some links:
http://soundcloud.com/flight-recorder
http://soundcloud.co/iron-blu
http://ironblu.hott.mx/

Thanks for the interest
Mick Clarke