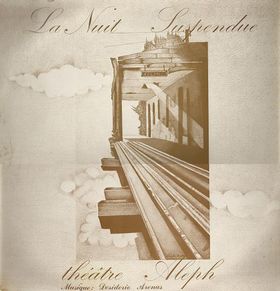 This one comes courtesy of our friend SF. He had sent me a batch of rare French albums in the late Spring, so its high time I get some of these out there!

" La Nuit Suspendue" is a theater play set to music. So a bit of a slog if you don't speak French, though there is some wonderful piano, string synthesizer and flute here to enjoy. References include Après la Pluie, Chene Noir, J.A. Seazer, and even Mike Oldfield.

SF further adds: "I was drawn to this record for the cover and also the mythical label...Kiosque d'Orphee who brought us many wonderful obscurities such as Didier Bocquet, Jean Luc Hamonet, Orval, Emeraude, Kennlisch and Rictus to name a few. I had seen it on want lists as well so when I came across it, I bought it.

I did not know what to expect when I put it on. I had done some research and found out that Theatre Aleph was a group of performers started by Oscar Castro in the late sixties in Chile, who was imprisoned in the seventies by the Pinochet government and later exiled in Paris where he created La Nuit Suspendue a stage play put in music by Desiderio Arenas. The play was recognized with an award in 1982. As for the record itself, there's not a lot of information to be found.

Listening to it I found the record original and was quite taken by the play and the different actors coming in and out adding layers upon layers, I have always been partial to concept albums and narrated text on music...this was no exception. I know I am not doing the record justice so you will just have to listen to it and decide for yourself :)"

Priority: none
Posted by Purple Peak Records at 7:02 AM