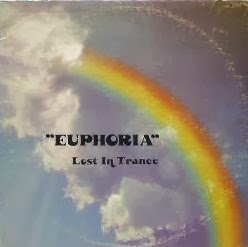 Next one up from the CD-R revisit project. This is a title I have a long history with, but still don't own it in any form.

I'm pretty certain the band put this out on CD (or at least authorized a private press). In 2006, when I was doing my initial research for the CDRWL on the title, it seemed to be available. Now I can't even find a trace that it exists - except for one review on Amazon where he goes on to say the issue is horrible, and that the bootleg is way better. Ugh. So I think, if nothing else, we're calling for a much better reissue!

Euphoria's sole work is an excellent sophisticated hard rock album from Milwaukee (a few years ago, they resurfaced and had relocated to the state of Washington - but that seems to have fizzled). Great songwriting with solid lead guitar. A slight progressive rock undertone can be heard in their arrangements. In some ways, this album predates some of the hard, heavy, and mean private press albums of the late 70s. Has that Midwest attitude and vibe. Wonderful album for fans of the genre (like me).

I remember when Rich from Rockadelic first found this album/band in 1988. Rockadelic never reissued the album (it was actually before their label started), but it would have fit perfectly on the imprint.

As noted above, watch out for pirate editions.

Priority: 2
Posted by Purple Peak Records at 8:09 AM