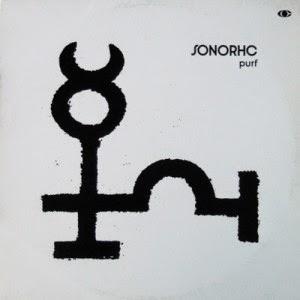 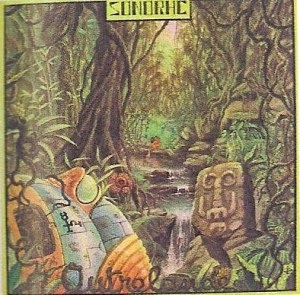 And, as promised, here's the second CD package from Fractal. Again, like Heratius, this is one I had in the main list, that would have most certainly been picked up for a feature via the CD-R Revisit project. Sonorhc's (Chronos spelled backwards) first two albums were released 10 years apart (1972 and 1982 respectively). My recollection, contrary to the norm, is that the latter "Outrelande" is the stronger album by some margin. I haven't heard them in a long time though.

My notes for "Purf" (1972): "I've seen this album compared to Agitation Free, but it's far more unstructured than that might imply. Basically what we have here is some unhinged experimental avant psych. Closer to some of the loons on the Futura label like Mahogany Brain and Fille Qui Mousse than anything typically associated with the Krautrock tag. "Chronos" is much recommended, though, for those whose tastes run to the exotic and extreme."

The label, once again, comes through with a far more comprehensive summary: "Early 70’s, a group of musicians around Jean-François Gaël, André Chini, Philippe Gumplowicz, Pierre Buffenoir and Youval Micenmacher formed Sonorhc in 1971 near Paris. This discreet band had released only three albums in twenty years : « Purf » (LP-1972), « Outrelande » (LP-1982) et « K’an » (CD-1991). 2014, Fractal Records propose today the first official reissue of the two first albums in a beautiful remastered edition after more than forty and thirty years respectively (!) ; two rare albums, difficult to find and much sought after by collectors.
The musical world of Sonorhc is oriented to collective improvisation and the research of tones ; they create a sound full of invention, rich technically, made by many differents instruments which incorporated judiciously elements from the rock music, free-jazz, acid-psych, concrete, ethnic and experimental making them as one of the most atypical French Underground group, and seems somewhere more closer to the German “krautrock” bands like Between, Agitation Free, Deuter, Limbus 3, Dzyan or the UK group Third Ear Band. But as the most well-known French band Magma, Sonorhc owns their original and strange logo and shows a strong collective : Jean-François Gaël studied musical composition with Michel Puig, guitar with Roger Chaput, electro-acoustic music with Pierre Schaefer at the GRM, and had composed many movie soundtracks later. Pierre Buffenoir taught guitar at the Conservatoire d’Ivry. André Chini is composer of contemporary music in Sweden. Philippe Gumplowicz is a music teacher at the University of Evry and with the percussionist Youval Micenmacher had recorded the 1978’s album “Marron Dingue” with the band Arcane V (see the Nurse With Wound list).
The present edition “2 albums in 1” includes the first “Purf”, a pure jewel of the genre and this one, for example, could had been easily one of the landmark album of the legendary 70’s Futura Records “son” or “impro” series and “Purf” well worth alone the purchase of this disc (!!), plus the second “Outrelande” a compilation of tracks recorded from 1973 to 1982, and with for both their original cover.
To summarize these 74 minutes with Sonorhc, just 3 words as the American blog “Mutant Sounds” has wrote : “A Total Mindbomb”.
THIS IS A « MUST » HAVE !  CD limited edition 300 copies.