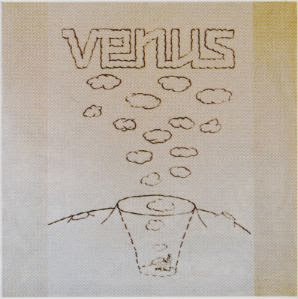 Here's another one from the AC's last stash. Here's how he described the album to me: "If there's any album that needs to be "demystified", it's probably this one. The next time this thing pops up on eBay, it's probably going to be hyped as a fantastic, mystical, cosmic krautrock masterpiece that has been hidden from the world due to it's insane rarity, bla bla bla... You might actually think that's going to be the case after the first minute or so of the intro, but then... Total amateur-hour kids in the basement garage rock with absolutely no redeeming musical value whatsoever. Yuck. Most very rare albums actually stink, and there's no better example than this. Please note that the album cover is just plain white. That crude "volcano" type of drawing is actually the insert."

As stated by the AC, Venus is one of those super rare albums that was in the pages of one of the older Pokora books, and thus has everyone and their Grandmother looking under every stone for a copy. Starting out with female German narration like Ash Ra Tempel's Rosi or Gilles Zeitschiff, it would seem to be an auspicious beginning for this super obscure Krautrock release. This is followed by a rather straightforward hard rock track, but with some odd female vocals and psychedelic guitar soloing, and so not really that far from my Proto Progressive with Female Vocals list that I have on RYM. It's a pity she didn't stick with German, because the English vocals are heavily accented, and somewhat strained. As it goes it gets weaker.There's some boogie shuffle rock to endure and when they go into folk rock territory, it's time to look for shelter. All the same, I found the album oddly alluring, though by no means necessary for a reissue. Worth two listens at least.

Priority: none
Posted by Purple Peak Records at 6:00 AM