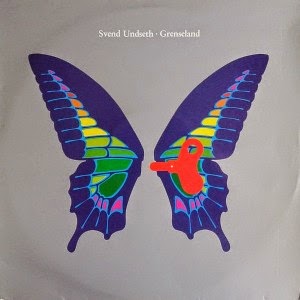 We've got 8 more fine discoveries from The AC to report on, including one really-out-the-blue album that was my favorite of the remaining batch (priority 2) and I'm awaiting the LP to arrive any day now. "Grenseland" might be my second fave of these eight. After reporting on these, it will be back to the CD-R Revisit project - and I have a growing list there too.

Let's have The AC introduce the album: "Surprising, obscure solo effort from multi-instrumentalist and former member of progressive fusion greats Vanessa. Completely eschewing his former band's style, this is actually a dark, experimental effort that's pretty intriguing. Synths, electric and acoustic guitar, bass, sax, flute, percussion and wordless vocals create an eerie soundscape that at times recalls Lard Free. There's also one track in full band mode that almost sounds like Heldon meets Hawkwind. Overall though, this mostly reminds one of some of the darkest 70s/early 80s electronic progressive works. There seems to be some kind of "arctic" concept going on here a la Richard Pinhas' "Iceland", but the atmosphere actually strikes me as more "lost in a haunted Tibetan monastery", with the clanging percussion, creepy chanting/moaning voices, etc. Maybe a bit too abstract for some tastes, but I really like it!"

And I concur wholeheartedly with the conclusion. I really like it too! It truly has an underground vibe, almost what you could expect from 1970 Germany or 1971 Sweden. Completely incongruous with the lighter fusion touch of Vanessa (who I also quite like). As is often the case with albums such as this, the experimentalism can sometimes overstay its welcome, but in general, Undseth does a fine job of keeping this within the rails.

Priority: 3
Posted by Purple Peak Records at 9:34 AM

I contacted Svend to ask about this getting a reissue, and he didn't seem to be in any hurry at all to make this available. High priority for me, zero priority for him, sadly! Therefor if anyone has a rip to share it would be much appreciated.