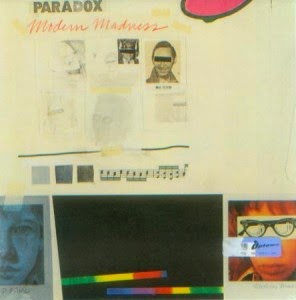 And here we are again with another incredible find from The AC! His deep diving skills are unsurpassed. Paradox, it appears, are an unknown instrumental progressive rock band from the New York City/Long Island area.

Here's the full dossier from The AC: "The label this is on, Magna Glide, has an interesting history. It was the project of Kasenetz & Katz, the well-known duo who had been behind much of the "bubblegum" pop of the preceding era, such as the 1910 Fruitgum Company, before hitting it big once again with Ram Jam and their annoyingly ubiquitous "Black Betty". They apparently took some of their earnings and invested them into a high-tech recording studio on Long Island, which opened in the mid 70s, where most of this label's output was recorded and produced. It all seems to have started out legitimately, producing a few singles that found some minor chart success, but when the tax scam train came rollin' into town, they apparently couldn't resist. On the positive side, it seems that they actually made some effort in signing and recording real local artists, and the packaging is generally quite cool. But the print runs, distribution and promotion seem to have been pretty much non-existent, even by tax scam standards. As a result, this entire enterprise has been basically unknown to collectors until just the last couple of years, after a few of the label's releases were finally dug up in the local NYC/tri-state area. The roster consists of the usual random grab-bag of tax scam wackiness, but none are as strange and obscure as the Paradox LP.

So, what about the music then? First off, the band was an instrumental power trio (guitar/bass/drums, no vocals, no keys, except for some minor use of string synth on one track). It's a bit hard to put your finger on, but the best description I can come up with is a mixture of trippy instrumental guitar psych/prog and thunderously heavy power trio hard rock/metal, all infused with a stoned, freaky vibe. I can only imagine the epic fog bank of pot smoke that must have descended on the studio when this was being recorded. On one hand, some of this material almost reminds me of the farthest-out end of the early 70s UK and US prog/psych power trio spectrum. On the other hand, there are sections here that are just incredibly heavy for the time, with a crushing guitar tone and fast, aggressive riffing that was very unusual for 1976-1977. A couple of the more extended cuts even have something of a proto epic metal feel to them, while many of the the trippier, spacier passages feature an eastern-tinged psych guitar style that's quite hypnotic. Somehow, this album is simultaneously anachronistic and way ahead of its time, so I'm going to assume that it was actually the work of time travelers. Very mysterious..."

Well, there you have it. I mean if that description doesn't excite you, not sure I can offer much more. One band that did come to mind while listening to Paradox is Automatic Fine Tuning, the excellent English instrumental group that continues to be much unheralded. AFT had a twin guitar attack recalling Wishbone Ash, and I would say that Paradox took on a more straightforward hard rock route, perhaps recalling Rush around that same time. From a composition standpoint, and perhaps overall musical approach, I was also reminded of the obscure Chicago band Seiche, who recorded a similar album in 1979 (though Seiche had vocals, giving the band a little downtime).

July 13, 2014 update: We've since heard from drummer Joe Wood, and he relayed the following comment: "Glad you like Paradox. I was in that band in the 80's. We recorded more music in the 80's on 2 inch reels. Three new songs will soon be posted on IACMusic.com. I am the new drummer and I'm working on finishing all the songs we started back then. It includes a new version of Modern Maddess. The new band had me Joe Wood on drums, Rich Hoffman the original guitarist Pete Martinez the original bassist. Also Rob Jack keys and Rob Adamo vocals. My new band Coney Island Steeplechase is on IacMusic.com Me and Rich Hoffman still keep in touch and work together. We are talking about a reunion. Pete is one of the best musicians and writers I ever worked with."
Posted by Purple Peak Records at 10:44 AM

I submitted a picture of this rare album that was uploaded on this website. I bought the album at a reasonable and what a great album this is. 1 of the rare tax scam label releases on Magna Glide.