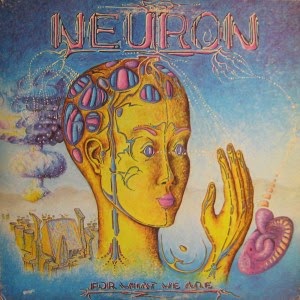 Here's one that would have been part of the CD-R revisit project, but I recently bought a mint LP copy from our good friend Midwest Mike, so that accelerated its feature.

The main reason I didn't give the Chicago based Neuron its own post in the first place, is because the album is on the margins of the list. While the music does fit squarely in the "classic Midwest prog" sound that I've featured extensively over the years, Neuron most assuredly are on the AOR side of the fence. All considered though, it's still a very good album, with a fine combination of radio friendly numbers, Latin rock, and progressive rock. Perhaps similar to Ethos' more commercially oriented efforts. The obscure Boston band Hot Flash would have to be considered another reference.