News: Aztec Records of Australia is back! 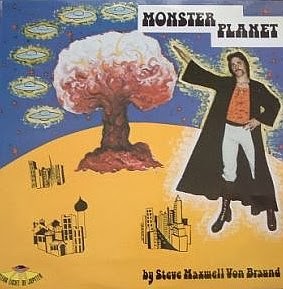 So this one is complicated. I thought that Aztec had become Sandman Records. Of course that would seem logical if you follow this link. Ever since Sandman came onto the scene, I've made it a point to check their website every once in awhile to see if they're going to dip back into Australia's progressive past. To date, it appears they have been reluctant to do so. I thought the story ended there.

Then our good friend Achim in Germany tells us that the Steve Maxwell von Braund album "Monster Planet" has finally been reissued on Aztec. Huh? So I went over to Sandman, but didn't see it. Then I followed the link Achim provided us. And, well.... there it is.... on Aztec Records. Huh? I then asked a long time friend of the CDRWL as to what is going on. Apparently this Aztec was bought out by Gryphon Music. And apparently they refuse to export their product outside of Australia (wholesale that is). OH GREAT. You can order it online of course, and it does appear the price includes postage, but I'm not entirely sure of that. I'm going to sit tight and watch what transpires here. For those who don't want to wait, then you can purchase this on CD from the label direct. We first announced this reissue well over two years ago! In addition to the CD label, Aztec started a sub label called Dual Planet (according to the comments section, Dual Planet is a separate entity from Aztec), Dual Planet have they've released Monster Planet on LP as well as the official/unofficial "bootleg" album Sunday Night at the Total Theatre (on both LP and CD). I guess that leaves only Cybotron's debut as the only album missing a CD reissue.

In additional reissue news from the resuscitated Aztec, look for Company Caine's 1971 debut "A Product of a Broken Reality" as well as the Ayers Rock "Big Red Rock" album to come soon. I haven't heard either, though the latter was originally licensed in the US. Looks like a good one that I'll have to investigate.

Welcome back Aztec!
Posted by Purple Peak Records at 9:52 AM

Yes, I learned it had been reissued on CD from Aztec, went to the Sandman link and couldn't find it anywhere. So instead of getting the CD, I ended up with the LP reissue -more easy to be spotted- which arrived home today...

Thanks Spyros for the comments. Yea I was really surprised by all of this. You know, I think Achim did say the live album was on CD too. I'm way too distracted these days! Thanks TheH for keeping me straight!

I don't think Dual Planet is a subdivision of either Aztec or Sandman, but a separate thing. They told me they are part of another company but I don't remember now what that was called. Anyway, I agree this is very confusing! The logo and packaging on the Monster Planet CD reissue is identical to the old Aztec releases so I assume the same people put it together. I suspect they are reusing the Aztec imprint for stuff they had licensed for reissue back when they were still in business. Other than that, I believe it is correct that Sandman is basically the continuation of Aztec, and currently you can buy old Aztec cds for AU$10 through the Sandman qwebsite.

Dual Planet is not associated with Aztec music. Dual Planet is an independent label working closely with Cybotron to release their back catalogue on LP.

I just got the Aztec-Reissue of "Monster Planet" (found it rather cheap on German amazon marketplace in used like new condition). It is the usual Aztec hight standard multipanel digipack with extensive booklet. Very nice. And very cool music. Krauty electronics with a very own twist, processed sax, violin and some weird vocals (Jim Keays from Masters Apprentices). Great stuff!

But the cover ist really awfull!!! Seems that Braund himself hated it and replaced it on part of the pressings. It has also some kind of funny smell (at least for a German), looking at Braunds arm ...

Thanks Achim for sharing your views on the CD and that it's the usual great Aztec job! I have the original LP, but haven't picked up the CD yet as I await to see if someone will import them into the States. And yes, the music is excellent!

Did they use the blue and yellow cover (which I think was meant to look like a Cosmic Jokers album since Maxwell had just returned from Europe at that time) or the black and white cover?

they used the yellow-blue cover, with the Ufos ... just the one you have on the blog. The black-white cover, that was designed by Braund to replace the yellow-blue one, can be seen on the back of the booklet. There is a very detailed story about the "history" of these covers in the booklet.

Not sure about the CDs, but Light in the Attic has had the vinyl at reasonable prices for a while now: http://lightintheattic.net/releases/971-monster-planet

Thanks Mike for your comments here and on Mad Curry!