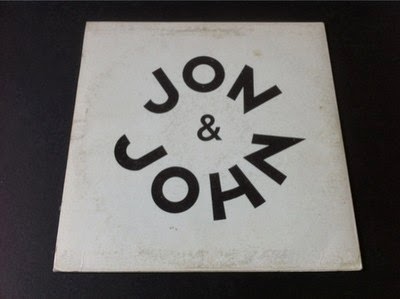 Jon & John, from Rochester NY, is yet another amazing find from the AC, and it's one of those albums - it's got a special vibe that transcends the normal expectations of a particular genre. In this case, that genre would be "psych folk". As you have read from me countless times over the years, I feel that most albums in this space are pure folk with very mild rock or psychedelic characteristics. But that's not the situation with Jon & John.

I'll let The AC take it from here, and I'll add a small bit of commentary at the end. "Interesting little album, that's mainly a folky singer-songwriter type of affair. However, that doesn't tell the whole story, as there are two tracks in particular that are full-on progressive rock in the Yes vein, with synths, tricky rhythms, etc. The rest of the material is also of surprisingly high quality, which might be explained by the somewhat unusual history of this duo that I've been able to dig up. It seems that Jon & John were actually Jon Elias and John Petersen, who must have recorded this when they were mere teenagers at a music school they were attending in Rochester, New York. A few years later they actually collaborated again to pen the iconic original MTV theme (the guitar riff with the astronaut standing on the moon), and both went on to have very successful careers in the film/television and commercial music industry. Jon Elias even produced "Union" for Yes! Anyway, while this isn't a lost classic by any means, it is probably worth grabbing if you happen to see it."

I'm going to take this one step further than The AC, in a rare display of slight dissension. I would say it is indeed a lost classic. I loved the mystical vibe and the high quality songwriting from the off. And the two progressive rock tracks he calls out are truly sublime. There's some wonderful flute playing throughout as well. Three minutes into this album and I was reminded of one of my favorite albums of all-time in the progressive folk space: Madden & Harris* of Australia. The compositions have a similar high quality about them. If Jon & John had employed a mellotron, then the comparison I think would be more obvious. A wonderful album that surely would benefit from a CD reissue.

* - Vinyl only collectors will be glad to know that our old friend Guerssen will be reissuing the Madden and Harris on LP for the first time. I own the Vicious Sloth CD from 20 years ago, and since originals are off-the-charts rare, I'll most assuredly buy this LP.
Posted by Purple Peak Records at 8:40 AM