News: Heratius to come out on CD from Fractal 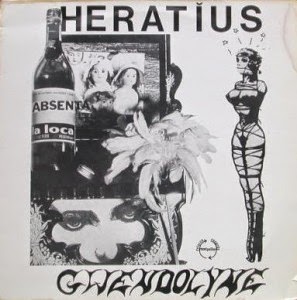 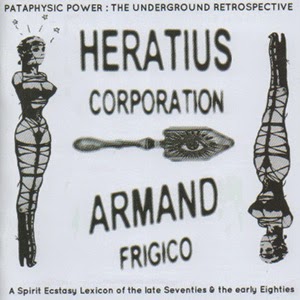 2014 was starting to look like a slow news year for CD reissues. But we have two announcements from the French label Fractal to report on (thanks Gal!). Fractal's musical tastes definitely run left of mine, but it's great to see them back in the reissue market.

I had Heratius in the main list, but never gave it a special feature. It would have been part of the CD-R revisit project had I gotten to it. Now I don't have to!

The first photo is the original LP (what a cover eh?) - and the second is the CD reissue cover.

My notes: "Spiritual successor to Fille Qui Mousse. Same kind of reckless anarchy in the studio. Spoken word, clarinet solos, piano, sustain fuzz guitar solos. Extremely deep underground music and VERY French. Have to possess an understanding of this style to truly appreciate. The AYAA label is another reference. Most albums on the do-it-yourself FLVM label aren't this experimental. Too out for me, but not unlistenable like some in the genre."

Ordered this baby the previous week. As an owner (and admirer) of the "Gwendolyne" LP, I can't wait for the 2nd unreleased. Even didn't know it existed. Plus the Armand Frigico weirdness... Great, great value for money!

Having a listen to Gwendolyne on youtube right now. I'm with you on this one: a bit too eccentric for my taste. It's quite a fun listen, but once will be enough for me. I'll go and sink my cash into some other plastic :-)

Any clue as to distributors that may still have this? I ordered a copy from a mailorder outlet in Italy in August and it's never gotten to me. I have the LP, but really want this as well.

I did a quick look around, but came up empty as well. You may want to send an e-mail to Fractal Records for advice or buy direct from them: info@fractal-records.com