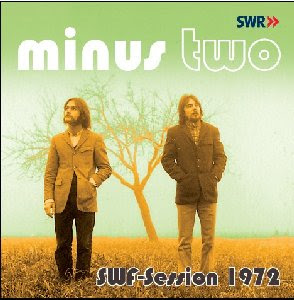 Long Hair does it again! The SWF vaults seem endless, and Long Hair once again presents us with a very interesting looking archival release.

Looks like I got way out in front of this one, so thought I'd repost it with today's date.

We now have a release time frame - look for it next week some time (~October 25). And we also now have an album cover to show.

"Minus Two - SWF Session 1972. This is another truly gem from the SWF broadcast vaults recorded in 1972. Minus Two founded in early 1971 in Mannheim (hometown of Nine Days Wonder) by organ player Günter Kühlwein (guest musician on Dzyan's 1. Album) and drummer Walter Helbig (also played with Nine Days Wonder and AERA) played a powerful progressive music sound sometimes with a certain sense of drama, melted classical influences with blues-rock and slightly jazzy hints. Early "Hardin & York playing" comes to mind, but Minus Two always showed their own imagination of progressive rock. All titles are self-penned and prove the musicians high level abilities playing their instruments and there are only organ and drums. Believe us, you don't miss any other instruments! This is a very complete sound by perfect trained musicians. CD contains 3 long tracks and short opener "Sticks & Keys" from the SWF vaults plus one bonus track. All titles were remastered from original master tapes. Booklet contains band history with a lot of photos. Don't miss this limited edition! Highly recommended."

Sounds to me like Sixty-Nine or Twogether. Should prove to be interesting!
Posted by Purple Peak Records at 3:20 PM