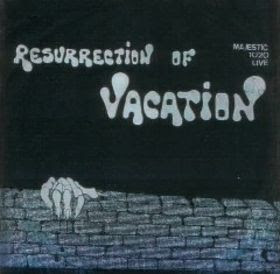 Standard issue guitar fronted blues rock in the Cream / Blue Cheer tradition, all very typical of the day. Sound is quite raw, supposedly a live recording, though I suspect the crowd noise was added later (I'm a bit suspicious of the delirious crowd, as if Vacation were The Beatles). Guitarist is a cut above the rest. Opening track is a fast paced instrumental, and not in step with the rest of the album. Reminds me of another Belgian group called Kleptomania. Fans of American garage music may take a shine to this, like Saint Anthony's Fyre for example. Other guideposts include France's Amphyrite and Quebec's Ellison.

Priority: none
Posted by Purple Peak Records at 7:37 AM