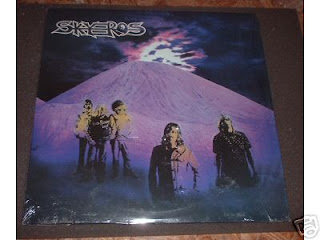 Skyeros reminds me a lot of another band we featured a few days ago - Luna Sea. Both are from the Midwest, and pretty much play in a straightforward rock style with a rural tinge. But whereas Luna Sea dedicated all of Side 2 to their more progressive ambitions, Skyeros waited until the final lengthy track, and even at that, it's marginally progressive. A few changes here and there, but it's pretty conservative. Some nice organ and guitar work can be found on this track. Doesn't really fit the "Midwest progressive" sound that we feature quite a bit here. This one is more rock / AOR oriented. It's a very rare and sought after album, so worth a daily entry for that at least.

The origin of the band is unknown, though one ebay auction states it's from the state of Missouri (since confirmed to be from Farmington, MO). This album came in courtesy of Heavyrock's collection, and from that we learn the album was recorded at Golden Voice Studios, which is in Pekin, Illinois (near Peoria). The studio is not a stranger to fans of the Midwest progressive crowd, as its where Pentwater, Starcastle (first album) and Styx (Man of Miracles) laid down their recordings. St. Louis based rock group Head East also recorded there.

The band was from MISSOURI indeed. I remember tracking down one of the band members, who lived in a small town, in Southern Missouri, Farmington, but could not get any copies of the album. He had a few copies stashed away for his grand kids!! FARMINGTON was also home (more or less) to another MO band, JOE PRITCHARD and GIBRALTAR.

The Band Skyeros was indeed from Farmington MO. . I grew up listening to these guys in the 70s' and was very good friends with the band members. I do have two copies of the album. Many good bands came out of the area back in those days... Savage Tenderness, Skyeros, Gibraltar, just to name a few.

This band was originally named Skye, but changed their name to Skyeros due to a possible legal issue with a funk band named Skyy. They later briefly changed their name to the Mason-Dixon Band. The band disbanded after one of their roadies was murdered. My favorite original song of theirs was "Making Me Blind", but it was never recorded. I was good friends with Rodney McCarren while attending Mineral Area College.

Thanks Anon for the excellent info!