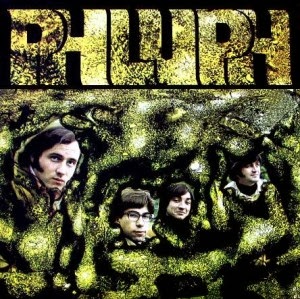 Next one up on the CD-R revisit project. This album received a CD press from Akarma in 2001, but like most of their US releases, the origins of the rights are dubious at best. So, at the very least, we are calling for a better reissue from a specialist label like Sundazed or Lion, with new liner notes from the band and an attempt at using the master tapes.

Phluph were like many one-offs during the psych era - faceless, nameless, and a $1 cutout bin special. On the clueless Verve label, and lost in the shuffle with many of their Boston ("Bosstown Sound") contemporaries, Phluph went away with barely a murmur. Starts off in typical lame-o psych / rock territory. But then it takes an interesting turn towards the weird by the third track (though perhaps  not weird enough). One distinguishing characteristic of Phluph's sound is the prominent use of organ. Has that carnival sound, like The Doors, but the similarities end there. Some surprising fuzz guitar outbursts too. Even a rare progressive rock move here and there. A very good listen that grows on you over time.

Priority: 3
Posted by Purple Peak Records at 8:29 AM